New research from Brazil: Failed immunization increases the risk of corneal clouding in babies. Contamination during pregnancy can cause congenital cataracts and retinopathy. 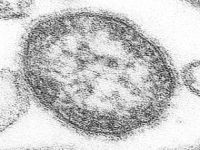 Until mid-March people were talking about measles in several states in Brazil. What's worse is that immunization against measles in 2014 was lower than expected in Brazil. MS survey (Ministry of Health) shows that the campaign did not reach 1.5 million children, totaling 85.6% of the target audience that is equivalent to 9.4 million children aged between six months and five years.

In São Paulo, which holds 45% of the population, only 75.31% of children in this age group were immunized, according to the Secretary of State for Health. According to the ophthalmologist of Penido Burnier Institute, Leoncio Queiroz Neto, in the first months of life, before it appears as a rash, the measles virus can reach the cornea, a transparent membrane that is in front of the eye and acts as a lens of 42 diopters. When the virus reaches the cornea it causes keratitis, which is an inflammation that must be treated immediately to avoid compromising the vision. Queiroz Neto points out that the ocular system is not fully formed at birth and any blockage in early life affects the development of vision.

The doctor says that the main symptoms of measles include: conjunctivitis, runny nose, cough, white spots on the inside of the cheeks, skin rash, malaise and fever. The presence of these signs in children may indicate urgency to consult an ophthalmologist. The examination to check if the cornea was affected is done with a slit lamp, equipment that integrates a high-density light lamp bio-microscope that allows you to check all external parts of the eye. According to Queiroz Neto, treatment is usually done with topical corticosteroids, but the product may only be used under medical supervision. This is because prolonged use can cause glaucoma and abrupt withdrawal predisposes to recurrence of inflammation. To treat measles the recommendation is to keep the child at home, well hydrated, clean the eyes with warm filtered water compresses and consult a pediatrician for antipyretic indication in case of fever.

The expert says that measles is an infectious disease, highly contagious that usually appears in childhood, although it can also occur in adults. The only way of preventing is by two doses of vaccine to immunize 97% of people and these must be taken before reaching the age of five years. Adults who do not know if they already had measles or received two doses of the vaccine, should look for vaccination. Immunization is only contraindicated for pregnant women and people with low immunity.

Women who contract measles during pregnancy transmit the virus to the fetus through the placenta. The transmission can cause, in rare cases, encephalitis, an inflammation of the brain that can be fatal. The ophthalmologist says that this disease may be accompanied by acute retinopathy requiring treatment with oral corticosteroids. Another congenital eye disease caused by the measles virus is cataract. Queiroz Neto states that the diagnosis can be made in the maternity ward by a minor eye test. The exam is done with an ophthalmoscope that throws light on the eye of the baby. When the light emits a steady red reflex it means that the eye is healthy. If the reflection is discontinuous or does not issue, it indicates cataracts. The treatment is done by surgery which replaces the opaque lens of an intraocular lens. The procedure can only be done from 3 months onwards. The ophthalmologist points out that the medical monitoring with quarterly checks and stimulating vision performed by the parents is essential for the child's development of a healthy vision.