Mycobacterium tuberculosis is thought to have emerged some 40,000 years ago, started to be prevalent some 10,000 years ago and developed some dangerous resistant strains around 6,000 years ago. A recent study tracks the history of Tuberculosis around the world and over the centuries. 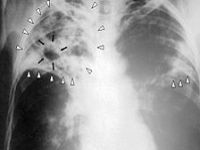 The article "Tuberculosis genomes track human history" by Ewen Callaway in the recent publication of Nature magazine (*) follows the fingerprint of human DNA on Mycobacterium tuberculosis, tracing its evolution over thousands of years and across different Continents.

The article "shows how a lineage of the bacterium that emerged thousands of years ago in Asia has since become a global killer that is widely resistant to antibiotic drugs", starting with the premise that M. tuberculosis probably appeared some 40,000 years ago, in Africa but only started to have a serious impact on human communities when they started to settle in communities, which happened when hunter-gatherers became farmers, around 10,000 years ago.

Thierry Wirth, evolutionary geneticist at the National Museum of Natural History in Paris, lead author of the study under review, has studied 4,987 samples of the Beijing Lineage of Mycobacterium tuberculosis (which was identified in Beijing in the 1990s) from 99 countries. Wirth had already established that all TB strains in circulation today had a common ancestor in the Middle East some 10,000 years ago.

Studying the genome sequences, Wirth and his team set to work trying to date the expansion of the lineage, aiming to study the evolution of the strains and the ineractivity among them. The team found out that the Beijing lineage was already present in North-East China some 6,600 years ago, at a time when rice farming activity was becoming common in the upper Yangtze River Valley.

The researchers traced the lineage to the Pacific islands, where it was probably transported by Chinese migrants in the mid-nineteenth century and to Kyrgyzstan, Kazakhstan and Uzbekistan, where Chinese traders travelled during the 1860s and 1870s. Cases of infection with the bacterium rose exponentially as industrial cities emerged after the Industrial Revolution and again with the advent of heavily populated cities in the twentieth century.

There was a respite in the 1960s, as new antibiotics combated the bacterium and incidence started to decrease, but signs of multi-resistance started to appear in the 1980s and 1990s and the advent of HIV/AIDS saw cases skyrocket, as the Beijing lineage becomes ever more infectious. Today, not only has it learnt to evade antibiotics but the Beijing lineage is also evading the human immunological system.