This year's Ebola Virus Disease outbreak is the worst in history. The latest figures indicate 19,031 people infected and 7,373 deaths, a mortality rate of some 39 per cent, prompting the UN Secretary-General Ban Ki-Moon to state that while much remains to be done, the UNO will work towards total eradication of the disease. 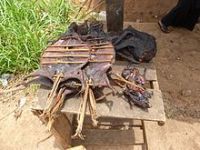 Nearly a year after the virus first appeared in the Republic of Guinea (in February; the outbreak then spread to neighboring countries Liberia, Sierra Leone, Mali and Senegal, and also to Nigeria), there is still a worrying increase in cases in the forested areas in the hinterland of this country, although there are signs that the outbreak is slowing in some regions.

"Much remains to be done. Ebola continues to spread and is a serious risk for all Guineans," declared Ban Ki-Moon on a high-level visit to the West African countries affected, accompanied by World Health Organization Director-General Margaret Chan, Special Envoy for Ebola Virus Disease David Nabarro and the Director of UNMEER, Anthony Banbury.

The focus today is to engage national government officials, community leaders, traditional healers and local communities in coordination with the UNO's regional organisms, in fighting the disease, spreading awareness and adopting adequate practices. Mechanisms are being set up to ensure that cross-border infection does not occur.

Referring to the "extraordinary" response from the African countries affected, the UN Secretary-General went on to "invite the international community to remain mobilized," adding that "Our common goal is to eradicate the disease completely."

EVD is not yet an airborne virus like the Influenza viruses, although it is transmitted by contact with bodily fluids, such as blood, faeces and vomit, milk, urine and semen, possibly also saliva and tears, more especially in the later stages of the illness, and from sweat, studies are inconclusive, according to the WHO. However, the information is unclear because the same source, the WHO, states that EVD can be caught from touching contaminated surfaces. Some say that the virus then needs to be passed to mucous membrane through touching the mouth, nose or eyes, others say it can be transmitted through lesions in the skin, while others state that it can be absorbed directly through the skin, in which case it is enough to touch an infected and contagious person.