Exclusive interview with Shumon Sengupta who has been working in Sierra Leone in the healthcare sector, and who speaks to PRAVDA.Ru about Ebola Virus Disease, and claims it sets an unprecedented challenge which required an immediate and widespread international response. He speaks of the horrific disease and his experience facing this killer virus. 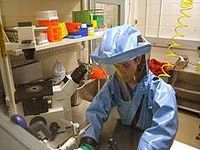 Shumon Sengupta is Country Director of Marie Stopes International (MSI) in Sierra Leone. Headquartered in London, MSI is one of the leading non-government providers of family planning, sexual and reproductive health (SRH) services in the world. In Sierra Leone, MSI implements large scale SRH and maternal health projects across the country. His teams of over 200 healthcare workers have been helping the Government of Sierra Leone's response to the outbreak of Ebola Viral Disease.

He speaks to Pravda.Ru.

Pravda.Ru: Shumon, thanks for giving us this interview on your experiences in Sierra Leone. What exactly is your organization doing there?

Shumon Sengupta: My pleasure and thank you Timothy!

In Sierra Leone, my organisation is providing a wide range of family planning, sexual and reproductive health (SRH) services, including safe motherhood services in twelve districts across the country. For the last 26 years, we have been taking our services to urban and rural communities and the most remote locations in the country. We provide our services through rural outreach teams, urban SRH clinics and through partnerships with private sector health providers.

In terms of our response to the EVD outbreak, we are supporting the Government of Sierra Leone (GoSL) in tracing anyone who may have come into contact with people infected with the virus, supplying Infection Prevention (IP) materials and information to Peripheral Health Units (PHUs), management of the referral pathways, social mobilisation and health education.

Pravda.Ru: What were the main challenges you experienced?

Your readers will probably know that on 8 August, the World Health Organisation (WHO) declared the Ebola Outbreak in West Africa a global health emergency. The epidemiological curve has shown a steep incline, indicating rapid and intense transmission of the virus and as of 18 August, the Ministry of Health in Sierra Leone (MoHS) reported 815 cases and 339 deaths in 13 of the 14 districts in the country.

But perhaps the biggest threat to the country is the damage it is doing to the already-weak health system. Even before the outbreak Sierra Leone had one of the highest maternal mortality rates in the world, and now even more women are at risk as healthcare workers are forced to reduce or suspend their work.

In many places in Sierra Leone, people have stopped going to a health facility out of fear of getting infected or being forced into quarantine. Health seeking behaviours are declining and anecdotal evidence indicates that women are increasingly delivering in their homes. We fear that the Ebola outbreak will potentially have a staggering impact, not only on the health system of Sierra Leone, but also on incidence of other infectious diseases and on infant and maternal mortality. The EVD outbreak could potentially undermine years of efforts in building the health system and efforts at improving the CPR in the country. It could also potentially result in a significant increase in teenage pregnancies.

Already a large number of health workers have died and many Sierra Leonean clinicians are unwilling to work in the isolation units. This is coupled with the limited capacity of the MoHS and the public health system for a rapid response. Fear and a lack of knowledge and materials to ensure infection controls by frontline health workers, has led to less than perfect care for EVD patients and high numbers of hospital acquired transmissions of the disease.

The main challenge we now face is our ability to continue to deliver high quality SRH services and support the Government of Sierra Leone (GoSL) in the EVD response, while ensuring that we don't unnecessarily expose our staff to risks of infection. We are addressing this through in-depth, repeated training on Ebola infection prevention. There is also a robust infection prevention protocol in place, in case any of our teams come across a suspected EVD case and we are providing supplies of infection prevention equipment and materials to our staff.  But sadly as a result of the outbreak we have had to temporarily suspend our 9 out of our 13 outreach services and 1 out of 8 SRH clinics.

In terms of its magnitude and impact, the EVD outbreak in West Africa is unprecedented. This is the first time we have seen such a high number of cases, such a wide geographical spread and inclusion of urban areas in the sweep of the disease. Consequently, it requires an unprecedented response and I call for the international community to do all it can to help us tackle the Ebola epidemic immediately..

Pravda.Ru: How do you explain these factors and what would your suggestions be to address them?

This is a new disease to Sierra Leone and West Africa. Sierra Leone is still experiencing the effects of the decade-long civil war and the country has low levels of education and literacy. As a result, communities are scared, mistrusting of their health providers, and are not fully aware of how the disease is spread.

In addition to gaps in clinical management, absence of a robust contact tracing mechanism and referral system are leading to the continued spread of the outbreak. This is further exposing health workers to risk and negatively impacting on their confidence.

Deeply entrenched social, cultural and kinship practices are also leading to increasing risks, primarily through household care of sick patients and customary burial procedures. Being the traditional care-givers within their families and communities, women are particularly at high risk.

Cross border kinship and trade ties in the region mean borders in West Africa are quite porous, which have made contact tracing in the three affected countries very difficult. People have even been reported to have gone into hiding to avoid being transferred to the facility for testing and treatment because of widespread fears and misconceptions.

Given its infectivity and lack of adequate number of trained and willing clinicians in the country, adequate clinical management of EVD patients is a major gap in the response. Despite the outstanding efforts of the WHO, MSF, and IFRC there are major concerns of whether there are enough Sierra Leonean clinicians who are willing to work in the isolation facilities. The country will need outbreak specialists from other parts of the world to come and help in the clinical management of EVD.

In addition to strengthening EVD surveillance, infection prevention and universal precautions, an effective referral system needs to be immediately put in place to reduce transmission risks for health workers and communities.

The social and cultural determinants of EVD transmission are significant. Hence social mobilisation and health education that utilises multiple strategies need to be rolled out rapidly. Clear and consistent communication on case investigation, contact tracing and quarantine need to be developed as much as measures to counter rumours and misinformation.

A coordinated response from the Government and all other development partners, including International Non Government Organizations (INGOs) is an absolutely key.  It is extremely important to coordinate all activities (including media and communications) within all 14 districts, to ensure the response is guided by evidence, and also led by the MoHS. Consistent public messaging is extremely important.

Pravda.Ru: Could you explain to our readers what happens when a person falls sick with Ebola Virus Disease (EVD)?

The early symptoms of EVD include high fever, intense weakness, abdominal pain and headache, body pains (especially the chest), difficulty swallowing, vomiting and diarrhea (can be bloody), dehydration (no tears, dry tongue, sunken eyes) and in some cases bleeding from the eye, nose, ears, rash. One can become sick between 2 and 21 days after having contact with a person already sick from EVD. EVD therefore is a serious, infectious and very deadly disease caused by a virus. It can kill people if treatment does not start early, when the person first becomes sick.

Pravda.Ru: What can be done on an international level?

Clearly, a country like Sierra Leone requires not only financial, but also technical support from the international community. In addition to addressing the funding gaps in the EVD response, Sierra Leone will need a large number of outbreak specialists from all over the world to come and help in the clinical management of EVD cases.

Affected countries like Sierra Leone need to rigorously conduct exit screening of all travellers at international airports, seaports and major land crossings, looking for unexplained raised temperature consistent with potential Ebola infection, something that the country has already started doing. Equally importantly, non-affected countries need to immediately put in place systems and capacities to detect and contain new cases at airports, seaports and at all border crossings.

Currently, there is no approved treatment or vaccine for the Ebola virus. Facility based treatment that can be given to patients includes intravenous fluids to stop dehydration and antibiotics to fight infections. Needless to say, there needs to be accelerated research on the Ebola vaccine and drugs.

Experts say pharmaceutical companies are unlikely to invest the huge resources needed to develop new drugs when these would probably be used only occasionally in relatively small numbers of people. They say investment is needed from international agencies to have any realistic chance of success in the future.

PRAVDA.Ru: Why did the World Health Organization once again not introduce travel restrictions right from the beginning of the outbreak?

I can't speak for the WHO, but it is a highly respected organization, which is very careful, and rightly so, about recommending anything that could potentially expose individuals, communities and countries to health risks.

It would be worth reminding readers, that unless one is providing care for an EVD patient, the risk of a traveller becoming infected with the Ebola virus during a visit to the affected countries and developing disease after returning is very low.

It was a pleasure to speak to you Timothy. I would conclude by saying that while the EVD outbreak in West Africa is serious, if there are well planned, concerted and multi-pronged efforts backed by technical and financial assistance from the international community, we will be able to beat the virus. Like many other responsible international organizations, Marie Stopes Sierra Leone, in its capacity, is committed to supporting the country to control and then end the epidemic.