More than half of teens use the morning-after pill indiscriminately. The habit can increase the risk of glaucoma and other serious eye diseases, an expert warns. How many girls aged fifteen to nineteen years of age use this pill without realizing the dangers? Studies point towards a shocking trend among this age group. 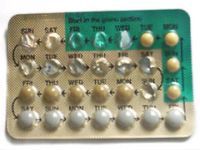 Brazilian girls 15-19 years old may not know how the morning-after pill works, but 60% have already taken it. The majority, 60%, made ​​indiscriminate use, taking it along with monthly contraceptives. This is revealed in the recent survey released by the nursing faculty at USP - Universidade de São Paulo, Brazil.

According to the Penido Burnier Institute's ophthalmologist, Leôncio Queiroz Neto, the recommendation of the WHO (World Health Organization) is just to use the morning-after pill for emergency, never more than once a month and not mixing with other contraceptives. "Taking another contraceptive greatly increases the hormone levels in the bloodstream and causes serious health problems that interfere with vision," he says.

Just to give you an idea, the morning-after pill single dose is 1.5 mg of levonorgestrel, a derivative of progesterone that in this dosage is equivalent to half of a monthly pill dosage. In women, he comments, sex hormones have a direct relationship with glaucoma. Other systemic changes potentiated by the indiscriminate use of the morning-after pill that interfere with eye health are: water retention, hypertension and thrombosis.

The expert points out that a recent study released by AAO (American Academy of Ophthalmology) shows that the use of contraceptives for 3 consecutive years doubles the risk of developing glaucoma. He explains that this is because the hormonal reflux can interfere with the drainage of aqueous humor and increasing the pressure inside the eye that characterizes primary open-angle glaucoma.

This does not mean that every woman who takes birth control pills will have glaucoma because the disease is multifactorial,  he says. Although the outcome of the study is not conclusive, the recommendation is to make the AAO annual eye examination from age 40, regardless of the type of contraceptive used.

To Queiroz Neto, the girls who indiscriminately use the morning-after pill are at higher risk of glaucoma because of the high amount of this hormone in the contraceptive. He says that 80% of people only discover when the disease has already had significant loss of visual field or peripheral vision. Other factors that indicate a tendency to glaucoma are cases in the family, Afro-American race, obesity and high myopia. The treatment is made with eye drops that lower the pressure. The lack of adherence to treatment of the disease is the leading cause of irreversible blindness worldwide.

Queiroz Neto says that water retention causes widespread swelling, including eye neostructures. Therefore, although less common, in people who have kidney failure the angle between the cornea and the iris can close, causing a crisis of primary angle closure glaucoma. It is a medical emergency that has symptoms like severe pain around the eyes, severe and permanent impairment of vision, nausea and vomiting.

The doctor emphasizes that hypertension and thrombosis often triggered by contraceptives may cause other serious eye diseases. The main ones are:

• Retinal detachment caused by vitreous traction separating the layers of the retina leading to flashes of light and dark spots in the field of vision. Surgical treatment should be started immediately to prevent vision loss.

• Neovascular glaucoma resulting from the formation of new vessels in the iris that can increase intraocular pressure and result in vision loss.

To protect the health, the expert recommends to only take the pill under medical supervision and undergo ophthalmologic examination at least every two years.