The worst ever outbreak of Ebola virus in West Africa has ravaged communities in the Republic of Guinea, Liberia and Sierra Leone, and now there is the first probable case reported in Nigeria. Undetected chains of transmission are active, as 108 new cases are reported within two days. 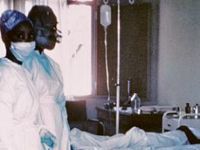 Described as the worst epidemic of Ebola Virus Disease to date, it has claimed a total of 672 deaths from 1,201 cases, a mortality rate of around sixty per cent. According to the World Health Organization, the distribution of the cases is as follows: Republic of Guinea 427 cases, 319 deaths; Liberia 249 cases, 129 deaths; Sierra Leone 525 cases, 224 deaths; Nigeria 1 case (probable). The cases reported include confirmed, probable and suspected cases.

There were 96 new cases reported from Liberia and Sierra Leone between July 21 and July 23 (7 deaths) and 12 new cases (5 deaths) in Guinea. The surge in new cases in Guinea comes after a low infection period, meaning that new series of transmission have spiked.

According to the WHO, "The Ministry of Health of Nigeria has reported the first probable case of EVD". This was a 40-year-old man, a Liberian national, who travelled to Nigeria, passing through Lomé, Togo. On arrival in Nigeria he presented symptoms of EVD, was hospitalized and died on July 25. However, we can change the word "probable" to "certain" because as the WHO itself reports:

"On 22 July, a sample was taken and preliminary laboratory analysis was conducted in the virology laboratory of Lagos University Teaching Hospital and tested positive for Ebola virus". Worse, the patient was infectious while travelling through Togo, and on the aircraft between Lomé and Lagos.

The death rate of EVD can reach up to 90%. It was first discovered in 1976 in the Democratic Republic of Congo in a village near the river Ebola. Affecting humans and primates, the most likely carrier or origin is the fruit bat.

Symptoms appear within two to 21 days after infection, which is caused by coming into contact with the body fluids of the victim or by eating infected meat (bushmeat, namely primates or bats, is considered a delicacy in parts of Africa). The onset is usually signaled by a fever, weakness, pain in the joints and muscles, headache, sore throat, then diarrhea, vomiting, a rash on the skin, liver and kidney damage and internal and external hemorrhages, bleeding from the ears, nose, eyes, mouth or even skin.

There is no approved virus or medicine available, the healthcare procedure being limited to supporting the patient while the body deals with the disease.