MERS-CoV, the Middle East respiratory syndrome coronavirus in Saudi Arabia, has claimed four new victims, the cases confirmed in laboratories. In the last year there have been 50 deaths from 108 laboratory-confirmed cases, indicating a mortality rate of some 46%. 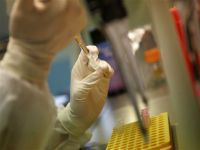 The latest four laboratory-confirmed cases were reported by the World Health Organization on August 30, a 55-year-old man from Medina, Saudi Arabia who is hospitalized and another man, 38, from Hafar-al-Batin, Saudi Arabia, who died nine days after contracting the disease. Two of his family members are also infected (a 16-year-old boy and a 7-year-old girl).

MERS-CoV is a severe acute respiratory infection (SARI) which has caused 108 laboratory-confirmed cases in the last year, occasioning 50 deaths. There have been other cases outside those reported. The advice for now from the World Health organization is vigilance, surveillance-reporting and screening, particularly of travelers returning from the Middle East who develop respiratory infections, and especially those who also develop atypical symptoms such as diarrhea.

The transmission mechanism is as yet unknown however the advice from the WHO that "Health care facilities that provide care for patients suspected or confirmed with MERS-CoV infection should take appropriate measures to decrease the risk of transmission of the virus to other patients, health care workers and visitors" would indicate that there is a risk that this dangerous disease could have human-to-human transmission mechanisms, a theory which is backed up by close family members contracting the disease.

For this reason, why does the WHO not advise trade and travel restrictions to the Middle East in general and in particular, to Saudi Arabia? Or is the general idea to allow the disease to propagate itself only for us to discover that those in charge of the United States of America's institutions have their hands in the Pharmaceutical lobbies?

The new killer virus in the Middle East, novel coronavirus, aka Middle East respiratory syndrome coronavirus (MERS-CoV) is deadly, there is no cure, its transmission mechanisms are hazy, there have been cases of human to human transmission, yes, according to the WHO, "The Emergency Committee, which comprises international experts from all WHO Regions, unanimously advised that, with the information now available, and using a risk-assessment approach, the conditions for a Public Health Emergency of International Concern (PHEIC) have not at present been met".

Until when? When it is too late? A 50 per cent death rate is staggeringly high...