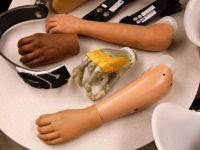 According to experts, the artificial skin is "smarter and similar to human skin." It also offers greater sensitivity and resolution than current commercially available techniques.

A group of Chinese and American scientists created experimental sensors to give robots artificial skin capable of feeling. According to experts, the sensitivity is comparable to that experinced by humans.

Trying to replicate the body's senses and indeed its largest organ, the skin, has been no mean feat but the need for such a substitute has been needed for a while now, especially in cases of those to whom skin grafts have not worked or indeed its use in robotics.

To achieve this sensitivity, researchers created a sort of flexible and transparent electronics sheet of about eight thousand transistors using vertical nanowires of zinc oxide.

Each transistor can directly convert mechanical motion and touch into signals that are controlled electronically, the creators explained.

"Any mechanical movement, like the movement of an arm or fingers of a robot, can be converted into control signals," the Professor Georgia Institute of Technology (USA), Zhong Lin Wang

The system is based on piezoelectricity, a phenomenon that occurs when materials such as zinc oxide are pressed. Changes in the electrical polarization of the mass can be captured and translated into electrical signals thereby creating an artificial touch feeling.

The touch sensitive sensors created by the China and US team have been dubbed 'taxels' and according to Professor Zhong Lin Wang of the Georgia Institute of Technology, they give the same range of sensitivity as the human fingertip.

Speaking about the taxels, Prof Wang said, "Any mechanical motion, such as the movement of arms or the fingers of a robot, could be translated to control signals. This could make artificial skin smarter and more like the human skin. It would allow the skin to feel activity on the surface."

Research has taken three years to create sensors that were still functioning after 24 hours of exposure to salt and distilled water.