Digital Medicine 2.0 for monitoring and control of patients

Telemedicine has been widely used in Europe and countries like Chile, Mexico and Brazil... Given the advancement of the Internet, analysts and practitioners have described telemedicine as eHealth, a new way of giving treatment, consultations, medical education and health status monitoring remotely. 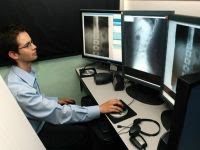 Telemedicine has evolved in recent years as health services at a distance. Doctors and hospital centers have begun to bet on the technological resources of the digital age and communication of health services adapted to the growth of social networks and the network society through networking.

Given the advancement of the Internet, analysts and practitioners have described telemedicine as eHealth, a new way of giving treatment, consultations, medical education and health status monitoring remotely.

Currently a patient can receive text messages to remind them to take their medication, a family affected by diabetes can be part of a virtual community to learn of new developments, a doctor can make a consultation via Skype or answer questions from patients on Facebook, and telemedicine acts in this way.

A member of the Spanish Society of General and Family Practitioners of Spain, Juan Jurado Moreno, head of innovation considers that telemedicine is a piece of technology that is giving answers today "and will further in the future," especially in the area of ​​control and monitoring of patients.

Besides being widely practiced in Europe, telemedicine or eHealth has also had a high level of responsiveness in the Southern Cone, with its beginnings in hospitals in Chile, Mexico and Brazil, where several doctors were the precursors of this system.

Venezuela also ventured into the development of telemedicine after commissioning the satellite Simon Bolivar into orbit on the 29th of October 2008.

The proliferation of gadgets, applications and Web-based information has given clinicians - especially young ones new tools: new ways to diagnose symptoms and treat patients, to obtain and share information, to think about what it means to be a doctor and a closer relationship to the patient.

Devices can be used look up drug dosages and interactions; creating risk profiles for patients, as well as an electronic stethoscope, which amplifies heart sounds while canceling out noises.