Hope for Alzheimer's and Parkinson's diseases

Scientists reprogram urine cells to generate neurons: Chinese scientists claim to have succeeded in reprogramming cells from human urine into brain cells (neural progenitor), in a study that may contribute to future advances in the treatment of degenerative illnesses like Alzheimer's and Parkinson's. 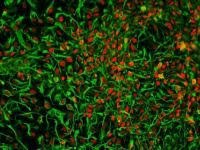 Research has contributed to the advancement of the treatment of degenerative diseases such as Alzheimer's and Parkinson's...

Chinese scientists claim to have succeeded in reprogramming cells from human urine into brain cells (neural progenitor), in a study that may contribute to future advances in the treatment of degenerative illnesses like Alzheimer's and Parkinson's.

The research, published in the latest edition of the journal Nature Methods, states that urine cells were isolated from three donors, 37, 10 and 22 years, and reprogrammed to generate neural progenitor cells (NPCs), which are precursors of brain cells. These NPCs, in turn, were able to subdivide and "efficiently generate functional neurons" distinct in vitro.

The same scientists had identified last year that human urine contains kidney cells "that can be reprogrammed into induced pluripotent stem cells (iPSCs)." Now, they say they have advanced this method.

"There are still tests lacking, but it is reported that cells survive and divide when transplanted to the brain of a newborn rat," says the study, led by Duanquing Pei, Chinese Academy of Sciences.

Healthy neural progenitor cells are a potential source of neurons for research, with the advantage of dividing and, because of that, they can be "expanded" in the laboratory before they are divided into neurons.

Research and testing of drugs

"There is great interest in generating neural progenitors of individuals with degenerative diseases," says a statement from Nature Methods. "And how cells are reprogrammed to be derived from non-invasive (processes)  of the urine donor, the study authors suggest that the procedure should be feasible to generate neural progenitors specific for certain diseases," adds the publication.

"Neurons derived from these cells may be useful for research in neurodegenerative illnesses and to test new drugs," the statement concludes.

The researcher Duanquing Pei notes that there is still no effective drugs to combat various neurological diseases. There are important advances in the field of stem cells, but the method is the subject of rcontention by the most conservative wing because the cells are obtained from human embryos.

Furthermore, there is the risk of immune rejection. The advantage of Chinese research is to avoid these dilemmas.

Reporting in the journal Nature suggests that the study could help researchers to produce specific cells faster for each patient, in greater number. "Neural Progenitors proliferate in the culture, so the researchers can produce different cells for their experiments," the report said. A geneticist consulted by the magazine says that another advantage of obtaining cells in this way is that urine can be collected from almost any patient.