A team of researchers at the Center for Neuroscience and Cell Biology (CNC) and the Faculty of Medicine, University of Coimbra (UC) participated in a study that involved research institutes around the world and discovered a rare mutation that increases the risk of developing Alzheimer's disease.

This study has now been published in the online journal The New England Journal of Medicine. Although rare, this mutation is very important for understanding the causes of the disease and could also be important in the development of new therapies.

The international team was led by scientists from the Institute of Neurology at University College London, of which two of the principal authors, the Portuguese Rita Guerreiro and José Miguel Bras, are part.

Advances in technology have allowed genes to be studied further, detecting mutations impossible to find previously. Although the causes of Alzheimer's disease are still unknown, a complex mix of genetic and environmental factors are the most likely causes.

As for the possible genetic causes, researchers have now discovered a mutation in a gene called TREM2 which is associated with an increased risk of developing Alzheimer's disease. While this gene variant TREM2 is rare (only 0.3% of the world population have this mutation), researchers found that it increases approximately three times the risk, which is the highest value ever found among genes associated with Alzheimer's disease in the past 20 years. What is known about TREM2 is that this gene has a role in immune response in a situation in our brain in case of injury or disease, which may be compromised when there is a mutation detected.

The study involved the analysis of data from more than 25 000 people, which was only possible thanks to the participation of researchers from institutions around the world, among which was a Portuguese institution, the University of Coimbra, represented by Catarina Resende de Oliveira, Isabel Santana and Maria Helena Ribeiro (CNC, FMUC, and Neurology Service of the University Hospital of Coimbra, CHUC).

"The fact that it is a mutation which, although rare, when present confers an increased risk for developing Alzheimer's disease and the relationship of the gene TREM2 with the immune response, opens new perspectives for the understanding of mechanisms of the disease, and consequently for potential future therapeutic strategies. This is particularly relevant when it comes to a devastating disease with features such as Alzheimer's disease currently has, not only for patients but also for their families, and for which therapeutic measures are scarce," says Catarina Resende de Oliveira. 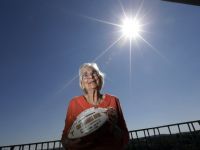