Uganda and the Democratic Republic of Congo are the scenarios of the latest outbreak of Ebola haemorrhagic fever. In Uganda, 24 cases and 16 deaths have been reported while in DR Congo, the health authorities have confirmed ten cases and 6 deaths. To note, the swift and efficient response from the African health authorities. 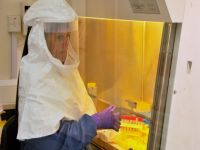 In Uganda the outbreak centers around the district of Kibaale, where national and district task forces of the Ugandan Health Ministry are working with international partners to control the situation. The last confirmed case was admitted to hospital on August 4 and there have been 24 suspected cases and 16 deaths in the country. 11 of these cases have been confirmed after laboratory tests at the Uganda Virus Research Institute (UVRI) in Entebbe.

As usual, the local authorities are proving they are up to the task. When such outbreaks occur in Africa, the response is swift and efficient. All contacts are being screened for 21 days, the maximum incubation period, healthcare workers receive special updated training and refresher courses, an isolation unit has been created in the Mulango National Hospital in Kampala and special teams have been visiting all the villages and residences in the affected area.

Education and communication materials have been handed out, health awareness programmes have been broadcast and teams of scientists are investigating the cause of the outbreak.

In the DCR, the Health Ministry has confirmed an outbreak of Ebola in Orientale Province, in the east of the country, in the districts of Isiro and Dungu. There are ten suspected cases, 9 and 1, respectively, and 6 deaths (5, 1). The DRC authorities are working with international partners to carry out an investigation and implement contingency plans.