The famous shark fin soup will no longer be served at official banquets in the People's Republic of China, in response to claims from environmentalist groups that the fin is obtained through cruel methods. However there is also a serious health issue which few people know about... 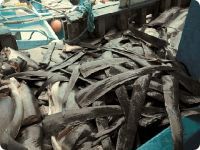 According to Xinhua news agency, an official memo was passed from the Council of State to all government departments, stating that shark fin soup was no longer to be a part of any menu on official occasions. One reason is a response to environmentalist groups which have been complaining that the fin is obtained through barbaric and cruel practices - slicing the fin off the living animal and throwing the carcass back into the sea to die slowly. Another reason is more economic: cost-cutting.

To date, around 70,000,000 sharks have been caught every year and killed for their fins. These cost around one thousand USD per kilo in the Hong Kong market, which is the main trading centre of this product. Environmentalists connect this enormous traffic to the fact that today 17% of species of shark are in danger of extinction.

Although the link between shark fin soup and human health risks is not a factor in the decision, recent studies point towards a possible connection between consumption of the cartilage in the shark fin and the development of human diseases such as Alzheimer and Lou Gehrig Disease, caused by the bio-magnification of a toxin that is produced by algae.

Studies carried out by the University of Miami in Florida indicated high levels of the neurotoxin beta-N-methylamino-l-alanine (BMAA), produced by the algae cyanobacteria, in all seven species of sharks whose fins had been used. It was found that apex predators, such as sharks, are more likely to accumulate high levels of this algae which builds in concentration throughout the food chain from bottom to top, and it binds with collagen proteins in the shark fin cartilage.