According to the World Health Organization, fifteen million babies are born premature and every year, one million of them die. Worse: despite the advances we are making in technology, the situation is becoming worse. Pre-term death is the second most common cause of death for children under five. 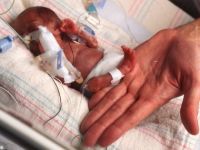 The WHO report* on premature babies is called "Born too soon: the global action report on pre-term birth" and for the first time, it provides data on national, regional and global estimates covering premature birth. The most striking information is that is shows the phenomenon is on the rise and according to the WHO, "is now the second leading cause of death globally for children under five, after pneumonia".

Millennium Development Goal 4 calls for the reduction of child deaths by two-thirds by 2015 and to this end, the WHO aims to change the situation quickly. The good news is that it can be done and priority goals have been drawn up.

40% of under-5 child deaths are among newborn infants, (neonatal period until 28 days after birth). 75% of these deaths occur in the first seven days of life;

87% of mothers and infants do not receive any skilled medical care during or immediately after birth in some developing countries; 66% of these deaths could be prevented through the implementation of health measures during the first seven days of life;

The main causes of neonatal deaths are prematurity, low-birth-weight, infections, asphyxia at birth and birth trauma (80% of deaths in this age group)

* "Born too soon: the global action report on pre-term birth" was drawn up by around fifty international, regional and national organizations, led by the March of Dimes, The Partnership for Maternal, Newborn & Child Health, Save the Children and the World Health Organization in support of the Every Woman Every Child effort, led by UN Secretary-General Ban Ki-moon.