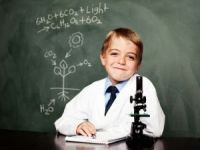 Many scientific studies try to discover how and why some are more intelligent than others.  Undoubtedly, intelligence can be simply summarized as the ability for problem-solving, which is constitutional, that is, the individual is born with it, and over time, it us enhanced by experience and knowledge of solutions. But if we are born with our determined intelligence, is it necessarily inherited?

The variability in levels of intelligence is so great, that it is clear that tens or hundreds of genes affect our intelligence quotient, which makes it difficult for scientists to prove the theory that a particular gene contributes to improving our IQ.

American and British scientists have concluded the largest genetic study in search of a specific gene that could influence human intelligence. Over 200 researchers compared the existence of a mutation, that is, a change in the code of a gene, HMGA2, in over 21,000 patients, and compared it with the size of parts of the brain of each.

The discovery was that this gene, previously associated only with human height, undergoes a change in its DNA with the exchange of a molecule that is replaced by thymine and cytosine.  The mutation causes the brain to be 3 cubic centimeters larger, and the results obtained on the IQ test is that these people, on average, score 1.29 more in points.  If both parents have the mutation, the effect is additive in the child, with an increase of 2.6 IQ points.

This result seems lackluster because the change was small and the researchers could not demonstrate whether there is a specific area that grows more than others, but it is the first study that directly associated a single gene to human intelligence.

Are political choices also genetic? The Political Physiology Laboratory of the University of Nebraska-Lincoln, coordinated by political scientist, John Hibbing, affirms with a series of studies that it is at least constitutional, that is, our brain is born already formed to become liberal or conservative.

According to their studies, liberals and conservatives have different reactions in situations that call for basic and primitive answers from the human being.  For example, pro-military conservatives have faster reflexes when they are frightened by sudden noises, and when exposed to threatening images, they respond with more intense adrenaline and look faster and longer at these images. Conservatives are more organized in the places where they live, while liberals are more tolerant of a mess.

The laboratory also finds anatomical differences in the brains of the two specimens.  One study demonstrated that conservatives have a greater right amygdala. The amygdala is a region deep in the brain, and is related to the reactions of fear and threat.  In contrast, Liberals have more cells in the cortex of the cingulate gyrus, which is responsible for the perception of repetitive errors and correction of behavior to avoid them.

According to the scientist, political choices are made more by personality characteristics already acquired at birth, rather than the reflection of ideas, experience and learning. Dr. Hibbing believes that conservatives are born less tolerant to change, but they are better leaders, and more loyal employees, while liberals are receptive to new experiences, adaptive to change, cope better with uncertainty and are more flexible and have an appetite for life.

To just look at the sides or the mirror, it becomes clear that these characteristics are not binary.  Therefore we cannot put all humans in just two sets of political choices. What the author aims is to preach tolerance of all sides, since speech does not change anatomy.