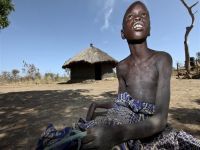 Health officials have been researching the possible causes of the disease since 2009, without success...

Nancy Lamwaka has bruises all over her body because she lost the ability to recognize danger. Most mornings, Michael Odongkara takes his daughter out of the house and ties the girl's ankle to a tree. It is not something he enjoys doing.

But the disease that causes violent seizures so decreased both the mental capacity of the child, age 12, that she no longer speaks, and often gets lost along the way. She once got lost in the woods for three days.

"It hurts so much to tie my own daughter to a tree ... but I am forced to do it because I want to save her life. I do not want her to get lost and die in a fire, or walk and drown in the swamps nearby" he said.

Lamwaka suffers from a disease that is being called "nodding syndrome" or zombie disease (in literal translation). It is of unknown origin and has no cure. The authorities of Uganda estimate that more than three thousand children have been affected.

It's called this because of causing episodes similar to epileptic seizures, the disease mainly affects children between five and 15 years, and has caused more than 200 victims in Uganda over the last three years. Thousands of children in southern Sudan are also sick.

As crises are often triggered by food, children who have the syndrome become malnourished and atrophy mentally and physically.

"There is a general effect on the neurological system and memory that impairs vision, eating or even the simple recognition of the environment," said Emmanuel Tenywa, director of disease control of the World Health Organization (WHO) in Uganda.

Lamwaka has had seizures up to five times a day over the last eight years and her health deteriorated. The father watches helplessly.

"When she used to speak, she asked for food," he said. "Today she just reaches out," he says. Why does this happen?

The syndrome was first documented in 1962 in Tanzania. Fifty years later, researchers still do not know what it is.

"We have a long list of things that do not cause the disease. But we do not yet have a definitive cause," said Scott Dowell, director of the division of global disease detection and emergency response by the Center for Disease Control (CDC).

CDC officials in Atlanta were in Uganda for nine days in February, the last of three trips to investigate the disease.

"They have ruled out, through field studies and laboratory tests, three different hypothetical causes, including 18 families of viruses," said Dowell.

This is relatively rare for the CDC: 600 disease outbreaks investigated by the division of the organization of global disease detection, and only six were resolved.

Although they have no reason to believe that the disease is going to spread, researchers cannot be certain. Dowell cites the "slim disease," which originated in West Africa in the 1980s and eventually finished with the onset of AIDS.

Researchers have some clues: one is a possible link with the black fly parasite that causes river blindness, a condition known as onchocerciasis. "All these cases were reported in areas where there is onchocerciasis. Therefore, we strongly believe that there is a relationship between the two," said Tenywa, from WHO.

The researchers intend to do genetic tests on skin samples taken from children to try to establish a connection.

"In the coming weeks, we intend to find out if this is a variant of onchocerciasis or could be some other type of parasite that looks like river blindness," said Dowell, of the CDC.

The researchers also observed a deficiency of vitamin B6 in populations where the disease is prevalent.

While the cause of the disease remains unknown, the authorities are focusing on treating the symptoms. Researchers at the CDC met with health officials from Uganda to discuss screening and how a selection of treatments might work.

The screenings will test two types of anticonvulsants and vitamin B6 supplements. Some affected children are already taking antiepileptic drugs, with varying degrees of success.

"I think everyone agrees that, at this stage, it would be nice to have a much better idea about what treatments are working and if any of them are harmful," said Dowell.

Investigators say they hope to have a protocol for screening, which will include 80 children, ready to be submitted for ethics approval in Uganda and the United States in a few weeks.

But for those living with the disease and its effects, everything seems to be moving very slowly. In Uganda, the frustration with the government response is growing.

"People are very bitter and feel that the government has abandoned them," said Martin Ojara, coordinator of the local council of the Acholi sub-region, where the disease is concentrated.

Although the government recently announced a plan to establish treatment centers and bring health workers to treat the disease, many people find little help.

Children with the syndrome are prone to accidents such as drowning and burns because of mental disability, and many of the deaths from the disease are the result of these secondary causes.

Since contracting the disease, Lamwaka had many incidents. Her body is covered with bruises as a result of several falls and her hands are burned because she recently fell into a fire when her parents were out.

"She does not know she is setting a fire that is burning, until someone takes her away from the fire," said the father. He admits that he stopped taking her to a doctor.

"Even if they give us medicine, I'm not sure if it will help," said Odongkara.

"I know many in this area. If a doctor was coming you'd see ... how many people, it is countless," she said. "It's as if the whole generation is being exterminated."