They promise quick weight loss and bigger muscles, but can lead to heart problems and kidney failure... 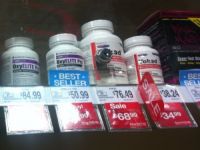 The latest "miracles" advertised by word of mouth among people frequenting gyms feature names such as Jack3d and Oxyelite Pro and similar.

"These so-called supplements are absolutely useless and do not have any benefits. Many substances are contraindicated and may be harmful to health. There is no medicine that burns fat. And such energy generated is based on caffeine, mostly depriving one of sleep," said Nabil Ghorayeb, a sports physician and cardiologist at Heart Hospital.

"Many stimulants are cousins ​​of amphetamines and can have dangerous side effects. It's like a bad shot of adrenaline," explains the doctor. In addition, a stimulant may be the trigger for a serious problem in the heart such as a cardiac arrest.

"There are several cases of young people under 20 admitted to hospitals with heart problems from the use of these substances," he says.

In May last year, in Recife, Junior Wilson Sampaio, 18, was found dead in the bathroom of his house. The boy's parents blame the supplement Jack3d, which he purchased through a physical education teacher. The relation between the boy's death and use of the compound, however, has not been established. The parents allege that Wilson was healthy, a football player, and that the only change in his daily life had been an increase in the dosage of the supplement.

"There is research showing that 20% of these supplements contain elements that are not mentioned on the label. Maybe a hormone, for example. They don't know what they are taking," he warns. Certain substances can overload the kidney and liver, leading to serious complications such as kidney failure.

Business manager Bruno, 27, is "trying" the supplement recommended by a friend. Within a month, he says he feels more energetic, his muscles have grown rapidly, but complains of side effects.

"I wake up early every day, I get off work and go straight to the gym. It's exhausting. I realized that I have more willingness to face training and I have had a more immediate response from my body, but I'm sweating a lot and get a little dizzy from time to time," he says.

"It is a help to achieve the body I want. When it is more defined, I intend to stop gradually," he affirms.

The friend indicated that the product he started taking seven months ago gives him a false sense of tranquility. "It takes a while, and it has not stopped because I did not. I never had anything but a trembling and feeling a little sick, but nothing that is not insurmountable," he believes.

For Ana, a 32-year-old businesswoman who is betting on the alleged thermogenic effect - that would burn fat quickly - the results are not so satisfactory. She is failing to lose weight quickly, as was the objective.

"I thought it would work in 10 or 15 days. But it is taking a little longer. I feel a tingling in the feet, but my teacher has said that is normal," she says, who weighs 60 kilograms and is 1.72 centimeters tall.

The two of them frequent different locations in different parts of St. Paul, he in the south and she in the west, and they ensure that the supplements are part of their everyday workout.

"Everyone always takes something. The 'virgins', who do not use anything, are rare," says Bruno. Ana chimes. "Women go crazy for innovations to lose weight. Even if you happen to get sick a little bit, it's worth it to conquer the body," she believes. The most common side effects are dizziness, fainting, sweating, paleness, nausea and even high blood pressure.

Neither of the two said they fear for their own health, not even knowing that the sale of such supplements is prohibited by the National Sanitary Surveillance Agency (ANVISA).

"It's so easy to find on websites and stores workout products that I never knew existed or were forbidden. But in the United States, there wouldn't be much trouble," says Anne.

The cardiologist, Nabil Ghorayeb, counters. "It should sound the alarm just to know that is sold illegally in the country here, these products are the result of smuggling. In the U.S., the control is different, the indication is different. There, if something goes wrong, the company is liable, the product is suspended, and people can go to jail for it. Here it does not happen," he exposes.

Another important and dangerous side effect is addiction. While experts say that the the addiction, as happens with drugs, is more rare, it calls attention to the psychological side of the issue.
"A person starts to use it and then thinks they need increasingly higher doses to achieve the desired effect, which increases the risk of sudden death," explains Mauro Dinato, sports physician and orthopedic specialist.

Experts are unanimous in also saying that good nutrition can stand in for supplements, in seeking more defined muscles, in the process of weight loss or to have more energy during training.

"Supplements are only suitable for high performance athletes, and Olympic level athletes may eventually need to replenish vitamins. However, for those exercising at the gym, a consultation with a good nutritionist brings the same result without risks," proposes Ghorayeb.

DiNoto advises those who want to intensify their workout be more willing to seriously look for a sports physician or physical trainer. .

"Do not rely on conversations with friends, for any change in the body must go through a series of clinical evaluations to evaluate the health condition of the person."