Legs may be new option to fight baldness

* By Alan Mozes Bottom of Form 1 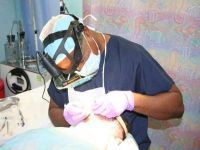 Doctors may have achieved a major breakthrough against baldness, transplanting hair from the legs to the head, thus obtaining a more natural look to the result. In the February issue of Archives of Dermatology, researcher Sanusi Umar explained that the the softest hair strands are found on the leg and are an ideal candidate for hair grafts in order to regenerate the scalp.

"The idea is to get hair transplants to the next level," said Umar, a private doctor in Redondo Beach, California, and clinical instructor of dermatology at the University of California at Los Angeles. There are "many problems with the traditional methods for hair transplants," he believes.

"First, traditional transplants take hair from the region at the back of the head, and these hairs of the head seem to be coarser," he said. This means that "if you pull them out and put them into the brow line, despite the best efforts, they will end up not giving a very natural appearance on the scalp. It is problematic to say the least," Umar explained.

"The other issue is that people who are bald have problems in different degrees," he noted. "You may have mild or severe hair loss."

This means that the standard method of hair transplant today is of little use to a man who has lost most of the hair and, therefore, has no source for a transplant.

"It's fighting a losing battle, because there simply is not enough to work with. Most ethical practictioners, therefore, will tell a very bald man that they cannot do the transplant because it will not be natural," said Umar. "Additionally, over the years, a large number of patients did antiquated hair transplant techniques," he added.

"They have scars and tufts of hair between failures. And they no longer have any source for donations left in the back of the head."

Looking for a solution, nearly seven years ago, Umar began to explore "transplants from the body," which he dubbed the "U-graft method." The technique essentially involves assessing the whole body for hair, keeping in mind that not all patients are equally hairy.

"With this approach, we can combine the beard, chest hair and the legs, depending on the distribution of the hair the person has," observed Omar.

"Mixing that with some thicker hair from the head, about 20,000 or 30,000, means that I am then able to help some severely bald individuals."

However, re-creating a natural line of hair on the forehead requires finer hair. Umar believes that the hair of the leg "works better in simulating naturalness [in this place]. Sometimes we also use the hair from the nape, which is also very good. And then, behind the forehead, we can use some of the thicker, coarser hairs of the head."

In his case report, Umar published the results of two efforts with such transplants. One involved the exclusive use of leg hair follicles to recreate the original line of the forehead of the patient, while the other involved merging the transplanted leg hair strands mixed with hair taken from other areas of the head to soften and re-create a "widow's peak" in the line of the patient's forehead.

In both cases, the transplant procedure gave rise to what Umar described as "hair strands fully grown and soft-looking" within nine months. Between 75% and 80% of the thin leg hair transplanted flourished in the "new home" on the head, and three to four years later, the two patients had a minimal loss of hair in the area of the ​​transplant.

However, Umar noted that men who seek such procedures should be prepared to spend lots of money. The procedures are spaced along two sections (each involving three to five days) which are distributed over a year. As each grafted follicle costs between 12 and 18 reals (7-11 US dollars) - and each follicle contains between one and four hairs - the procedure can end up costing in the thousands, depending on the severity of baldness.

The opinions of other experts on the transplant technique developed by Umar is mixed. Malcolm Roth, president of the American Society of Plastic Surgeons and chief of plastic surgery at the Albany Medical Center in Albany, New York, praised the innovation as "another example of how new techniques continue to refine and improve outcomes in cosmetic procedures to give patients a more natural result."

However, Barry DiBernardo, who has a private practice in Montclair, New Jersey, said the procedure raises some questions and concerns.

"Finding hair in other parts of the body is nothing absolutely new," he noted. "We considered this possibility a long time ago. When you're designing the line of the forehead everything that helps the site to look as what was there originally is valid," explained DiBernardo.

"But the body hair may have different thicknesses," DiBernardo said. "It may be wavier than the original hair, for example. The work looks correct, but the approach raises the question of incompatibility of hair, which of course will depend on each person," he said.

"Another issue is the potential for scarring. The harvest leaves scarring," noted DiBernardo. "You will not see the back of the head, and this is an area with good healing, but you will see the legs. And certainly the legs will not recover as well as the scalp."