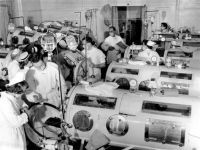 The UNO's World Health Organization has congratulated India on taking important steps towards eradicating poliomyelitis. Once considered the world's epicentre of the disease, in 2011 India did not register a single case and if the pending samples taken prove negative, the country will be officially declared free of polio.

The news means that there remain only three countries in which this virus is endemic - Pakistan, Afghanistan and Nigeria. WHO Director-General Margaret Chan has hailed India's success as "its greatest public health achievement", providing "a global opportunity to push for the end of polio". UNICEF Executive Director Anthony Lake believes that "India's achievement is proof positive that we can eradicate polio even in the most challenging environments".

The key to success
For Margaret Chan the key to India's success in virtually (or totally) eradicating poliomyelitis is a three-word formula: creativity, perseverance and professionalism and for Anthony Lake, the secret was strong leadership at a national and state level, enabling poor and densely populated states to achieve high immunization coverage rates.

The Indian Government provided two billion USD towards the financing of the eradication programme, in which 170 million children under five years of age were vaccinated each year in two national immunization campaigns, while around 70 million children received multiple vaccinations in the highest-risk areas.

Shining example
Margaret Chan considers the Indian programme to eradicate poliomyelitis as proving an example to be implemented elsewhere: "The lessons from India must now be adapted and implemented through emergency actions to finish polio everywhere". For Anthony Lake, "We have the ability to protect every last person, especially children, from this entirely preventable disease - and because we can, we must finish the job of eradicating polio globally, once and for all."

Despite the good news, the fact remains that a battle may have been won but the war is far from over: The WHO spokesperson for the Global Polio Eradication Initiative, Sona Bari, put this reality into words: "It is a very welcome milestone, but it is not the end of the road."