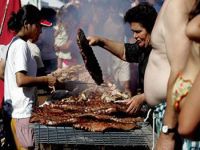 A team of researchers from the University of Copenhagen have taken another step to help people with weight problems see the pounds fall off. A hormone secreted by the intestine that had already been shown effective in regulating blood sugar levels is now able to help reduce the appetite - which later translates into a loss of weight.

According to a study published today in the British Medical Journal, this hormone, called GLP-1 (peptide-1 similar to glucagon), when given to people who are overweight or obese, was able to inhibit the appetite, with a consequent loss of weight, and at the same time regulate blood pressure and cholesterol levels.

GLP-1 is a hormone secreted by the intestine when we eat and it potentiates the action of insulin. Recently, treatment with this hormone began to be used in patients with type II diabetes, due to its ability to regulate blood sugar levels. However, scientists noticed that patients also demonstrated a decrease in appetite, which paved the way for further studies in order to use the GLP-1 in favor of weight loss.

Thus, researchers from the University of Copenhagen, Denmark, decided to analyze the results of 25 clinical trials involving over 6,000 patients who were given this hormone. The team had a concern in the analysis, taking into account the different study designs to minimize the possible errors of bias - one of many types of errors that can be checked when conducting a study.

After analysis, the team found that patients who were provided a significant increase of GLP-1, for at least 20 weeks, achieved weight losses greater than those of groups that served as a control. The benefit was particularly noted in patients without diabetes. But with this condition, participants also lost weight. There were also statistically significant improvements in terms of blood pressure, cholesterol and blood glucose. Liver enzymes were not significantly different.

With regard to side effects such as nausea, vomiting and diarrhea, some cases have been reported, but a large majority of participants expressed satisfaction with the treatment.

The authors affirm, therefore, that the analysis "provides convincing evidence that GLP-1, when given to obese patients with or without diabetes, results in significant clinical benefits, particularly in terms of body weight. Also, additional benefits can be achieved with blood pressure and cholesterol levels."

The group believes that this type of intervention should be "considered in patients with diabetes who are obese or overweight," though they say more study is needed to understand the behavior of this hormone in patients without diabetes in the long term.