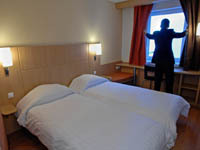 A group of Russian scientists under the direction of the chief urologist of Health Ministry, Professor Dmitry Pushkar, decided to find out how Russian males perform their sexual function. It took the researchers six months to come to certain conclusions, the Rossiiskaya Gazeta wrote.

According to Pushkar, until recently, medical specialists did not have such information in their disposal. Russian urologists had to use the information collected in other countries. The survey involved the men who hardly had any complaints about their health. Such men normally do not consult medical specialists.

The research was conducted among male residents of Russia's Central District, Siberia, Southern and Northern regions of the Volga and the Urals. The respondents were 20-75 years of age.

The survey showed that 90 percent of the polled respondents experienced problems related to erectile dysfunction. It is worthy of note that the men, who had such problems, did not consider their symptoms alarming.

The researchers analyzed which bad habits the men prone to erectile dysfunction had. Thus, 63% of men admitted to drinking alcohol regularly. About 50% smoked, 26% suffered from chronic stresses, 20% - from unwarranted fatigue, and one-third - from hypertension.

More than 50% of men under 60 years were overweight; 70% complained of age-related changes. The researchers also said that 20% of the respondents suffered from depression.

As for urination, only 37% of respondents could boast of the norm. Notably: the worst results were registered with the residents of central Russia. However, in the Southern region, the Urals and Siberia, the Volga region the statistics are not encouraging either.