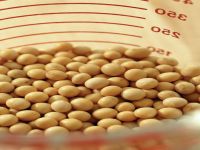 Spanish scientists found properties against obesity and hepatoprotective action of isoflavones - plant substances found in soy - that act similarly with certain hormones that the human body secretes, such as estrogens.

The study, done by members of the Center for Biomedical Research Network, Pathophysiology of Obesity and Nutrition (CIBERobn) of the Foundation Imabis of Malaga, was tested in rodents and published in the December issue of British Journal of Pharmacology.

In addition to the protective properties of soy isoflavones against weight gain, research has also shown its role in the activation of thermogenic brown fat and reducing fat in the liver, the CIBERobn spokesman said in a statement.

The application of isoflavones in humans could provide a new avenue of therapy for obesity using, instead of drugs, the active ingredient in soy.

This discovery reinforced the theory that affirms the multiple health benefits of these natural substances which are also beneficial for their antioxidant, anticancer properties and protective properties of the bone and coronary systems.

The first test identifies for the first time the actions of soy isoflavones on obesity induced by diet in an animal model. "Evidence of decreased weight gain, the activation of thermogenic brown adipose tissue, and reduced associated hepatic steatosis" the doctor, Fernando Rodriguez de Fonseca, head of group CIBERobn, who leads the work, pointed out.

Nutritional intervention was carried out in 36 rats that received two different types of diet, one rich in carbohydrates and one rich in fats, which induced obesity, diabetes and and fat in the liver.

Subsequently, rats were treated with daidzein (one of the main types of isoflavones) for 14 days. The main results showed that the higher the dose of daidzein in the diet, the lower weight gain and reduced the presence of hepatic fat.

This finding was associated with high levels of leptin (known as the hormone of thinness, which has among its functions to inhibit appetite) and low contents of adiponectin (whose circulating levels are inversely proportional to body mass index and body fat percentage, which also increases sensitivity to insulin).

The practice also found an enzyme with a determinative role in increased thermogenesis in brown adipose tissue after treatment with daidzein.

However, the authors explained that this study in animal models is not completely applicable to humans, since the effective doses, route of administration and different metabolism of rodents can make the results vary widely.