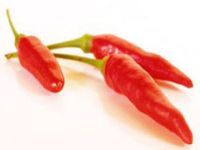 The power of the pepper is not only to make foods spicy . According to an article published in the journal Cancer Research, a substance contained in its formula, capsaicin, can be a weapon against prostate cancer.

Chili peppers are the fruit of plants from the genus Capsicum, members of the nightshade family, Solanaceae.

The discovery is still new, but studies claim that capsaicin might be the basis for a remedy in the fight against cancer. The study was made with genetically engineered mice and human cells that had prostate cancer.

They ingested a dose of pepper extract corresponding to three to eight peppers. What was noticed is that capsaicin increased the amount of some proteins involved in the elimination of cells, as well as reducing the number of cancer cells.

When consumed, it binds with pain receptors in the mouth and throat that are responsible for sensing heat. Once activated by the capsaicinoids, these receptors send a message to the brain that the person has consumed something hot. The brain responds to the burning sensation by raising the heart rate, increasing perspiration and release of endorphins.

Capsaicin is also an ingredient in many topical skin preparations used to relieve pain. Capsaicin is available as a cream, ointment, stick, pad, gel, liquid, or lotion. It is marketed under many brand names.