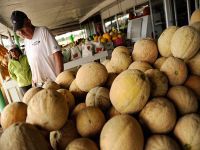 Fifteen people have died and a further eighty-four have been taken ill after contracting Listeria bacterial infection from eating cantaloupe melons. This is the worse case of food poisoning in the USA in the last decade. The epicentre seems to be a farm in Colorado, pending investigation...and so far it has affected nineteen States.

Pending investigation because this would be the first mass outbreak of Listeria in cantaloupe melons (seeming to mirror the cucumber-based E.coli outbreak in Europe earlier in the year). And worse may be still to come, given the relatively long incubation period for the bacteria - up to 70 days. If this outbreak follows the same lines as the European one, it may not suffice to wash the melons because the bacteria may enter the flesh through the root system.

In which case, what are they doing these days in the production processes of our food?

Listeria monocytogenes is especially dangerous for the elderly, the very young, pregnant ladies or those whose immune systems are impaired. The symptoms are fever, muscular pains, tiredness, diarrea. Being a bacterial infection, it can be treated with antibiotics. More serious cases can give rise to meningitis, convulsions, and sudden death.