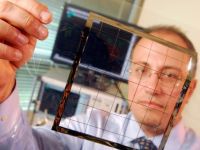 Research proposes the use of eletromagnetic energy for the treatment of patients with advanced liver tumors.

Sounds crazy. Recently, an international research study was published in the prestigious British Journal of Cancer, demonstrating the use of electromagnetic fields (EMF) to treat disseminated cancer of the liver.

The study was a joint effort of scientists at the Hospital Clinics of the University of Sao Paolo School of Medicine, University of Alabama, USA, and the Swiss Federal Institute of Technology. It was led by oncologist, Paulo Frederico Costa. That's right. Patients received totally unconventional treatment.

An instrument like a spoon was placed in the mouth of the patient and connected by cable to a device that generates electromagnetic energy. The patient sits for 60 minutes three times a day. They can be watching television, reading or writing. They usually do not feel anything. Some have a little sleep during the procedure.

The treatment was repeated until the doctors detect any eventual inefficiency with the growth of tumors. Amazing results. Besides a calm tolerance, more than 40% of patients had their tumor become stable, with no increase in volume, or they experienced a reduction of its size as measured by computerized tomography.

Dr. Costa was interviewed to clarify the potential results of this study.

Interviewer: How did the idea come about to use electromagnetic fields in the treatment of liver cancer?

Frederico Costa: The inquiry began in December 2001, during a project led by Dr. Pasche in Switzerland. It was observed that cancer patients had an autonomic response (cardiovascular) when exposed to specific frequencies with a 10-7 Hz precision. There began the process of identifying a specific set of frequencies for each disease.

With the development of equipment capable of exposing the patient to this set of frequencies, the study began to test it in the treatment of patients. We found the tumor response in three of them interesting. We started the study in advanced liver cancer, whose treatment in 2005 was based only on chemotherapy.

Interviewer: What patients were included in this study?

Interviewer: How would you classify the results, obtained in this study?

FC: Revolutionary. It is a field of research very interesting and with very promising potential.

Interviewer: What are the observed or expected complications?

FC: So far, about a thousand individuals have been already exposed to this form of prospective application of CEM during the several experiments. The only observed toxicity was mild drowsiness. We have patients exposed to long periods of continuous treatment, up to five years, and we are not observing any serious harmful effects.

Interviewer: Is this treatment  expensivise?

FC: The technology is sophisticated, it has to issue a combination of frequencies with an accuracy of 10-7 Hz, that are distributed and controlled by the network platform. The therapy is experimental and therefore is not commercially available. Its cost has not yet been established.

Interviewer: How do patients react?

FC: In the studies we conducted, adherence to treatment was almost universal, only one patient stopped treatment.

Interviewer: What was the reaction of your medical colleagues to these results?

FC: In the beginning, to our team of researchers, they were incredulous. After inclusion of the third patient and observation of the response to treatment, we were encouraged. With the publication of the study, we have received feedback from experts around the world wanting to participate in further development stages.

Interviewer: What is the next step in the research?

FC: We are finishing the experimental studies and preparing the opening of more extensive study in liver cancer in the first half of 2012. •