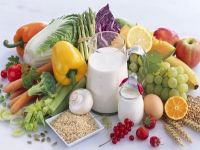 (now also against obesity and diabetes)

All police have an elite or a special forces unit, called to more difficult and delicate missions. The Americans have firepower and expertise in the form of SWAT (special weapons and tactics) and in Brazil, critical conflicts are resolved by BOPE. The world of nutrition also has a weight squadron with the right to its own symbol and an arsenal that, instead of weapons, is full of grains, fruits and such.

This is DASH, a diet program in the United States created 14 years ago and charged with disarming bombs in the blood vessels. But in recent times, it has been proven that ths program is not just for lowering blood pressure.

Doctors and nutritionists were invited by the renowned American magazine U.S. News to create the healthiest diet in the world. The DASH displaced another 19 menus, including the Mediterranean diet, and took first place. This choice, of course, asks a question: after all, what does DASH have that the others do not have on their menus?

Before answering, it is necessary to go back and dig through its deeds on the counterattack with hypertension. "This program, created by four American universities in partnership, based on rigorous scientific criteria and outcomes, measured by surveys, exceeded expectations, being similar to the action of blood pressure medicines," summarizes cardiologist Heno Lopes, from the Heart Institute of São Paulo and author of The Diet of the Heart, published by Saude.

As for DASH's secret weapon, Lopes bets on the predominance of fruit: "They provide many antioxidants, substances that act in the inner layer of blood vessels and make them more relaxed and less exposed to plates." It is a perfect strategy to thwart heart attacks and strokes.

The nutritionist Camila Gracia, Cardiology Society of São Paulo, believes the convenience factor. "It's an easy menu, without major restrictions," she says. It also highlights the space reserved for low fat milk and milk products. "They provide calcium, a mineral that helps control blood pressure and weight," she says.

Experts still list among the strengths of DASH the high supply of grains and vegetables, strongholds of fiber that are low in calories. "The plants provide food to this plan, a large amount of potassium, a mineral that promotes relaxation of blood vessels," says nutritionist Camila Torreglia, Heart Hospital, in São Paulo.

To complete the DASH program, as no other, increases the intake of walnuts, chestnuts and almonds. "In addition to minerals that fight hypertension, they have the good fats that improve the flow of blood," Camilla says. But another feature of the DASH, diametrically opposed to its rival the Mediterranean, is moderation in oils. The "squad" does not tolerate high-fat dishes.

The qualities mentioned allow us to understand why this menu is meant to act against excess weight. A study from Boston University in the United States for ten years that followed nearly 2,300 teenage girls found that those who more closely followed the DASH model put on less weight over the decade.

Although the results give prestige to the diet, Heno Lopes remembers the measures needed to make this diet siccessful. This program must be adapted to a regimen of calorie restriction. "People are so overweight due to oil, which is a major source of calories," exemplifies Camila Gracia. And, as DASH already teaches, meat and fatty cheeses need to be cut.

In recent months, there was evidence that the anti-infarction squad deserves to be called to protect the body for those who have diabetes. In another poll by U.S. News, nutrition experts acknowledged DASH as the best menu for the control of blood sugar. "The main recommendations for the diabetiics are to break up food consumption throughout the day and to consume fiber. Both are covered by this program," says nutritionist Camila Leonel de Abreu, Federal University of São Paulo.

As is known, the fiber found in vegetables reduces glucose absorption in the intestine and promotes satiety - all resulting in more balanced rates of sugar.

It was not enough to break the scheme of risk factors that culminate in heart attacks, attacks on the brain and kidneys, DASH still promises to enter the war against cancer. "Some studies suggest that this diet would have a role in preventing tumors, especially in the intestine," says Heno Lopes. But there are still long-term studies lacking that legitimize this potential.

The benefit in this case would come from the previously announced range of nutrients, especially antioxidants, which serve as bodyguards to the cells, preventing their degradation - the first step in the emergence of a tumor. As you can see, DASH has everything to show that given a mission, the mission is accomplished. And while it waits for new awards, it would not be bad to make it a routine.

The history of the DASH squad

It was born in 1997 based on scientific principles. The first version did not propose cuts in salt, which was adopted in its update. "It's a diet with significant impact on blood pressure and may reduce mortality from strokes by 30%," says Emilton Lima Junior, a cardiologist at the Catholic University of Paraná.

How much to consume: 8 servings (each equivalent to a 1 / 2 cup or one slice of bread) throughout the day
What they have: fiber, vitamins and minerals
Cardiovascular effect: the fibers reduce the absorption of cholesterol, preventing traffic of fats for the blood. Vitamins and minerals are antioxidants and help prevent the process that culminates in clogging the vessel
In weight and diabetes: the fiber provides satiety and facilitates the control of sugar in the circulation.

How much to consume: 4 to 5 servings per day (each unit corresponds to a medium glass of juice)
What they have: fiber and antioxidants
Cardiovascular effect: the joint action of these two nutrients reduces the risk of plaque to form and grow inside the arteries
In weight and diabetes: the fibrous components decrease the absorption of glucose and avoid peaks in the blood. Only it is worth pointing out to be careful with sugary fruits such as grapes.

How much to consume: 4 to 5 servings per day (each equivalent to 1 cup of raw vegetable or 1 / 2, if it is cooked)
What they have: fiber, vitamins and minerals
Cardiovascular effect: we talked about the role of fiber, but vegetables are crucial for providing potassium, a mineral that relaxes blood vessels
In weight and diabetes: the fiber helps tame blood sugar and eliminates the belly more efficiently. And vegetables are low calorie, making weight loss easier.

How much to consume: 2 to 3 servings per day (each one corresponds to 1 cup milk, 1 cup of yogurt or a piece of cheese 40 grams)
What they have: calcium and protein
Cardiovascular effect: here's the highlight for calcium, a mineral that helps prevent spikes in blood pressure
In weight and diabetes: studies show that calcium interferes with fat cells, minimizing the accumulation of weight, and contributes to glucose control.

How much to consume: 2 small steaks a day
What they have: protein and, in the case of fish, which should be consumed at least twice a week, the omega-3 fat
Cardiovascular effects: Proteins are good for all tissues. The omega-3s fight inflammation in the arteries
In weight and diabetes: there is evidence that omega-3 from fish favors the action of insulin in cells. As for the meat, give preference to lean cuts such as filet mignon.

How much to consume 4 servings a week (each equivalent to 1 / 2 cup of cooked food)
What they have: fiber and vitamins such as folic acid - they also have soy isoflavone, protective of the heart
Cardiovascular effect: the fiber decreases cholesterol levels and folic acid is a vitamin that reduces the risk of plaque formation
In weight and diabetes: once again has the benefit of the fiber that controls appetite and the rates of sugar

How much to consume: a handful (40 grams) four times a week.
What they have: vitamin E, selenium, and good fats
Cardiovascular effects: Vitamin E and selenium enshrine the vessel walls. Good fats, like omega-3, act against inflammation recurring
In weight and diabetes: useful to overcome insulin resistance behind type 2 diabetes. But not worth abusing, because nuts are very similar and are quite caloric.

A position on candy / sweets

DASH does not disallow its use, but requires a lot of thrift: the directions are for not more than 1 tablespoon per day five times a week. The reason is that sweets are loaded beyond measure with sugar and saturated fats, items that damage the blood vessels, boost weight gain and further disrupt the blood glucose levels.