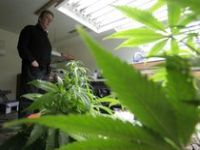 Canadians poisoned by eating brownies with marijuana by mistake

Employees of a company in the city of Victoria were taken to the hospital with dizziness and disorientation. They are doing well now...

Three employees of a company in the city of Victoria in Canada, became ill after a coworker inadvertently gave them chocolate brownies made with marijuana. Local police said they were investigating a possible case of "intoxication" after the three were taken to a hospital "dazed and disoriented."

The woman who took the brownies to the workplace simply said that she had found them in the refrigerator. But her son later admitted to police that he had baked the brownies with marijuana some time ago, but then forgot about them.

Reports published in the Canadian media say police decided not to open a criminal inquiry into the case because there was no intention to cause harm. But the paper Vancouver Sun, said the young man responsible for the brownies should be sentenced to community service. The three co-workers "poisoned" by the brownies were released from the hospital after a few hours.