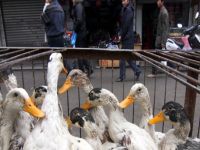 It is back and the worse news is that a mutant strain has been detected of the H5N1 Highly Pathogenic Avian Influenza Virus. Meet H5N1 - 2.3.2.1, which has appeared in the PR China and Vietnam. H5N1 has caused the forced culling of 400m. poultry since 2003, costing 20bn. USD in economic damage, has infected 565 people and killed 331.

H5N1 has an average mortality rate of 58% in humans, making it a highly pathogenic disease. Putting it on a global scale of worst-scenario pandemic proportions, if one third of humanity became infected by the disease, it would occasion the death of around one billion people. The good news is that to date there is no such evidence, because human-to-human transmission is very rare and is almost always associated to people living together around infected poultry.

Almost always, because in Hong Kong (1997) and Vietnam (2004) there were cases of person-to-person transmission. The fear among the scientific community is that it is a case of if and not when, the virus makes the species jump from bird to human or from bird to pig to human and then cause a worldwide pandemic. This does not mean, however, that a human version of H5N1 would have the same highly pathogenic characteristics of the strain which is essentially Avian or Bird Flu. It is generally believed that such a species jump occurred before the deadly outbreaks in 1918, 1957, and 1968.

The UN Food and Agriculture Organization (FAO) has called for heightened surveillance after AH5N1 has resurfaced, after having been eliminated from the majority of the 63 countries where it was registered around the time of its peak (2006). From 2010 to 2011, there have been some 800 registered cases, reaching countries which had been free of the virus for years. It is back.

The countries at the centre of the latest outbreak are Israel and the Palestinian Authority territories, Bulgaria, Romania, Nepal and Mongolia, according to Juan Lubroth, Chief veterinary officer of the FAO. Also worrying is the mutant strain of the virus found in the People's Republic of China and parts of northern and central Vietnam. This strain is known as H5N1 - 2.3.2.1. and the FAO fears that the virus circulation in Vietnam could spread the virus to neighbouring countries - the two Koreas, Japan, Cambodia, Laos, Thailand and Malaysia while wild bird migration could spread the virus further afield.

The virus has never been completely eradicated from Vietnam, PR China, Bangladesh, India, Indonesia and Egypt and these are the countries the FAO considers as being the most at risk.

The Vietnamese authorities are considering a targeted vaccination campaign in the Autumn. However, Mr. Lubroth stated recently on UN Radio that "There is no indication that the new virus strain will behave differently than the previous one or that it is more dangerous to humans. All countries, and not just those where the virus is entrenched, should be concerned that it has not been possible to eliminate and contain the H5N1 virus".

"Production practices and marketing practices should be better regulated and more hygienic, as the consumer needs to be protected as well as the production facilities because so many people's livelihoods depend upon poultry and poultry rearing," he stated.

Signs and symptoms of Avian Influenza in Humans