Can you have fried potatoes while dieting? 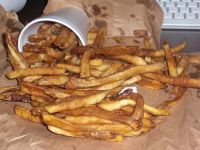 You can, according to a study released by the University of California, USA. There, researchers have developed a nutritional education program for 86 overweight people. They followed this diet for three months.

But, amazingly, the menu could include five to seven servings of potatoes a week. In practice, one serving equals a baked potato or two tablespoons of the fried version. At the end of the study, all participants lost measurements, proving that this food can be part of a strategy to eliminate those extra kilograms/pounds.

But, before you rush out to the nearest fast-food, it is important to know that everything depends on how the frying is done - and how much you eat, of course. "The ideal temperature is between 170 and 180 ° C," advises nutritionist Vanderlei Marchiori, the Brazilian Association of Sports Nutrition. If, during the preparation, you get a lot of smoke out of the frying pan, it is a sign that it has been heated too much.

"And the amount of oil should be sufficient to cover the food." But not too much. There is no point to overdoing the quantity of an ingredient or to use it very sparingly, it makes the potatoes absorb more and more oil, making it saturated with fat.

Another tip is to not reuse the oil, even if it looks brand new. "During prolonged heating the product changes, taking longer to fry foods. This also increases its absorption," said Vanderlei.