Tuberculosis, a disease of the poor 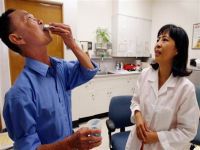 The prices of medicines for DR-TB are rising around the world.

Access to treatment for drug-resistant tuberculosis (DR-TB, its acronym in English) remains compromised, especially in developing countries of the South, because very few pharmaceutical companies make quality drugs. In addition, the lack of competition has driven up the prices of drugs.

In the last decade, about five million people worldwide have developed the DR-TB. But a "shockingly low number" of patients (less than one percent) have access to appropriate treatment, according to Medecins Sans Frontieres (MSF).

About 1.5 million patients died in the past 10 years. The situation is particularly acute in poor countries with high numbers of HIV infections (human immunodeficiency virus, which causes AIDS), particularly where antiretroviral treatments are inadequate. South Africa is one of them.

One of the main barriers to treatment is the limited availability and high cost of quality medicines to treat DR-TB. For some drugs, there is only one manufacturer of assured quality or a single source for the necessary active ingredient.

"There is little investment in research and development of drugs against tuberculosis because it is a disease of the poor, and therefore a lucrative market doesn't exist for the pharmaceutical industry," said the office coordinator for MSF South Africa, Eric Goemaere.

This has pushed up prices of most drugs for DR-TB. Treatment can cost a patient $9,000, according to MSF, almost 475 times more than the common treatment of tuberculosis.

Costs have increased further in recent years. "While drug prices usually fall with higher demand, in the case of drugs against drug resistant TB, they grow, some up to 600 or 900 percent. That is simply wrong," said Goemaere, who heads a project of treatment for HIV and tuberculosis in Khayelitsha, the third largest informal settlement in South Africa.

The exorbitant increase in prices is due to the lack of effective control mechanisms that no longer exist and subsidies don't exist to keep them low. It is also a reflection of insufficient competition in the market.

Only six products (for five different drugs for DR-TB) have been prequalified by the World Health Organization, and only four sources (for two different drugs) are recommended for purchase this year.

WHO responded to the growing need for drugs against drug resistant TB in 2000, creating the Green Light Committee, which reviews official health and non-governmental projects and the possibility they would allow access to medicines of proven quality at reduced prices.

Although the Committee is theoretically useful, the bureaucracy has prevented several treatment programs around the world from being of benefit.

In 2010, only 12,000 patients were enrolled in treatment programs approved by the Committee, against 440,000 new cases of the disease and 150,000 deaths, according to MSF. Only 13 percent of the estimated market of drugs for DR-TB is currently channeled through the Global Drug Facility of the WHO.

"WHO has responsibility for this disaster," Goemaere said.

Nongovernmental organizations lobbied WHO for years until it created the Committee. But strict conditions and cumbersome administrative procedures prevent many health care providers from benefiting.

"The Committee provides few incentives because their quality guarantee endorsement is much more bureaucratic and centralized. The rules are self-limiting, making WHO into a doorman more than someone who provides support," Goemaere pointed out.

WHO's chief medical officer for TB in South Africa, Kalpesh Rahevar, recognized the Committee's administrative barriers, but said the agency had begun a reform process in early 2010.

"We're trying to simplify the request process," said Rahevar. "WHO also plans to extend its mandate to monitor TB programs worldwide, not just those that are involved with the Committee."

But until then, hundreds of organizations and health departments will have to keep on buying drugs to treat drug resistant TB from pharmaceutical companies that offer products of doubtful quality and high prices.

The Health Department of South Africa is one of them. Instead of requesting membership to the Committee, the ministry purchases drugs at fixed prices directly from South African subsidiaries of U.S. manufacturers, Sandoz Aventis and Sandoz.

According to the temporary Director of the department for treatment of tuberculosis, communications and social mobilization, Garvon Molefe, the ministry decided to buy medicines exclusively local, even if more expensive, in order to benefit the national economy.

"The reason why the Department doesn't continue the Committee's initiative is that after an alarming unemployment rate in South Africa, they do not want to waste the local pharmaceutical firms that give work to South Africans," he told IPS.

The Department currently spends $4,400 for treatment for each DR-TB patient. Goemaere said MSF, through the Committee, pays about 30 percent less for the same drugs, which means more patients can be treated for the same money.