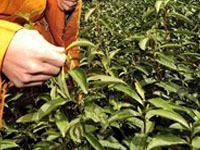 Another food scandal is brewing in the world. This time, however, it goes about one of world's most popular drink - green tea from China. A dangerous carcinogenic agent has been found in eight articles of Chinese food imports, including green tea (powdered and leaf tea), as well as jinjili oil, almond and guava essences.

According to researchers, Chinese green tea can be highly dangerous to several races, including the Caucasian race. It goes about dioctylphthalate, a highly serious carcinogenic agent, Pravda.Ru reports. This substance is categorized as phtalates, salts and ethers of phthalic acid. It was previously used as a dissolvent of flavoring and denaturating agents in the production of toys and other goods for children. In the food industry, the substance was used to ameliorate the appearance of foodstuffs.

The carcinogenic agent was found in a guava-flavored food additive produced by Guangzhou Meiyi Flavors&Flagrances. It was also found in green tea powder and food oils by Jiangmen Gaudy's Food, as well as in baker's yeast by Jiangmen Jhan Wang Food. All the three companies are registered in China's Guangdong province.

In May, the authorities of Taiwan ordered to destroy 286 tons of dioctylphthalate-containing food products, BFM.ru reports. Beijing banned the imports of 948 articles of foodstuffs from Taiwan.