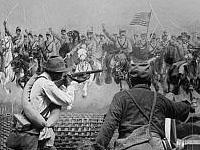 Many in Russia believe that the Civil War in the United States took place because of the liberation of black slaves. Such a shameful point of view is widely spread among Russian teenagers and their Western peers as well. However, there are reasons for this misconception to appear.

The civil war between the South and the North of America in 1861-1865 is familiar to many through the Hollywood masterpiece "Gone With the Wind." The war erupted after the North decided to save the country from collapse and not to let the South separate. President Abraham Lincoln wanted to preserve the integrity of the United States of America in the first place. The emancipation of slaves in the southern states was a secondary issue for him.

The enormous British empire collapsed like a house of cards. The Soviet empire fell into pieces not so long ago as well. The Americans started the war against each other in the second half of the 19th century to preserve their country as one single nation.

On June 16, 1858, Abraham Lincoln, the 16th President of the United States, delivered his famous House Divided Speech. The best-known passage of the speech is:

"A house divided against itself cannot stand. I believe this government cannot endure, permanently, half slave and half free. I do not expect the Union to be dissolved - I do not expect the house to fall - but I do expect it will cease to be divided. It will become all one thing or all the other. Either the opponents of slavery will arrest the further spread of it, and place it where the public mind shall rest in the belief that it is in the course of ultimate extinction; or its advocates will push it forward, till it shall become alike lawful in all the States, old as well as new - North as well as South."

Lincoln was not an abolitionist, he was not advocating the abolishment of slavery. He was promising slave-owners in the South not to interfere in their affairs.

"No negro slave imported as such from Africa, and descendant of such slave, can ever be a citizen of any State, in the sense of that term as used in the Constitution of the United States. This point is made in order to deprive the negro, in every possible event, of the benefit of the provision of the United States Constitution which declares that "The citizens of each State shall be entitled to all privileges and immunities of citizens in the several States," Lincoln said.

As we can see, Lincoln used the word "negro," which is considered politically incorrect nowadays and admitted the impossibility of recognizing the rights of black-skinned Americans. Lincoln's primary mission was to defend the central government from centrifugal narrow-minded interests. He detested slavery with his whole soul for ethical reasons, as a person and a citizen. However, he would never unleash a civil war in the country to abolish slavery.

A year after the war, Rep. President Lincoln wrote:

Lincoln always supported the gradual liberation of black on a compensation basis. The emancipation of slaves had become an objective by the end of 1862, when Lincoln realized that it would not be possible to reconcile the south. In addition, the military campaign in 1862 ended with the defeat of the North near Fredericksburg. To win the sympathies of Europe's major powers and monarchs, which traditionally sympathized with the South, the US president issued a decree to emancipate all slaves in the restive South from January 1, 1863. The Emancipation Proclamation said that "that all persons held as slaves" within the rebellious states "are, and henceforward shall be free."

The proclamation gave an impulse to passing the 13th Amendment to the US Constitution, which abolished slavery in the United States.

Radical Republicans put the presidential decree to complete rout because the slaves were emancipated in the territories beyond the power of the federal government. However, the decree changed the character and the course of the Civil War and turned it into the war for the elimination of slavery.