The case of the deadly cucumbers 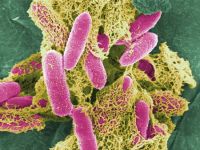 Russia to ban EU vegetables? What is the origin of the outbreak of deadly E.coli? WHO astonished at the extreme speed of the spread of the outbreak of a lethal strain of enterohaemorrhagic disease - over 1,000 cases and 13 deaths, twelve of whom were women. Many questions arise as the deadly plague spreads over western Europe.

Gennady Onishchenko, Director of Russia's Consumer Protection Agency, confirms that Russia has banned all vegetable products from Spain and Germany and if the outbreak spreads, then all vegetables from the European Union will be banned. Over 1,200 cases have been confirmed in Germany, Sweden, Denmark, the Netherlands, the UK and Poland, products have been removed from shelves in Austria, France and the Czech Republic, Hungary and Luxembourg have been alerted. What is going on?

The German health authorities have confirmed 1,200 cases of E.coli, many of them Haemolytic-uremic Syndrome, or HUS. A strain of the E.coli bacteria (Escherichia coli), called enterohaemorrhagic E.coli, or EHEC, produces toxins denominated STEC (Shigatoxin-producing E.coli) or VTEC (verocytotoxin-producing E.coli) which in turn can cause a bacterial infection (HUS) which can lead to kidney failure or failure of the central nervous system.

It has a 5 per cent mortality rate.

Spain denies responsibility: "There is no proof"

For the media, all fingers point at Spain, with reports of "Spanish cucumbers" imported by Germany being responsible for the outbreak; however, until definitive results have been obtained from tests, such a statement is only conjecture and the Spanish authorities, understandably, are outraged. Spain's Secretary of State for European Affairs, Diego Lopez Garrido, declared in Brussels that "There is no proof. That is why we are going to demand accountability for those who have blamed Spain for this matter. You cannot attribute the origin of this sickness to Spain".

The disease is serious - according to the European centre for Disease Prevention and Control in Sweden, it is one of the largest HUS outbreaks worldwide. 12 of the 13 deaths recorded so far were recorded in northern Germany; in this region, 11 were women and one man, another woman dying in North Rhine-Westphalia. However, the cases are now widespread around Europe, most of these being linked for the time being to Germany.

Meanwhile the German health authorities are preparing for an emergency, because the first symptoms, severe abdominal pain, diarrhoea, sometimes haemorrhagic diarrhoea, fever and vomiting, can take up to ten days to appear.

For now, the source identified has been narrowed to cucumbers, tomatoes, aubergines or lettuces - quite a wide variety of vegetables and as yet there is no clear source or origin.

The question remains, what are we supposed to eat?