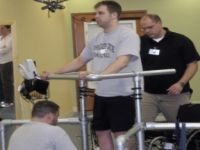 Rob Summers during physical therapy session with the electrical stimulator: steps on the mat

After Rob Summers become paraplegic due to a car accident in 2006, his doctors said he would never walk again. They were wrong.

In 2009, the 25 year old American underwent implantation of an electrical stimulator in his spinal cord to try to "wake up" his damaged nervous system. A few days later, Summers was able to stand without help. Months later, he moved his toes, knees, ankles and hips, and could take some steps on a treadmill.

"It was the most unbelievable feeling," he said. "After not being able to move for four years, I thought things would finally change."

Despite this optimism, Summers only stands alone during his two hour physical therapy sessions, when the stimulator is turned on, and for day to day, he is still in a wheelchair. The doctors are limiting the use of the device to a few hours a day.

His case is described in a study published this week by The Lancet medical journal. The research was funded by the National Institute of Health, United States, and the Christopher and Dana Reeves Foundation.

For years, some people with spinal cord injuries, which still retain some control over their members, have felt improvement after experiments to electrically stimulate their muscles. But progress for those like Summers, after so great a damage to the spinal cord, was unheard of up to that time.

"It's not a complete cure, but it may help some patients," said Gregoire Courtine, head of experimental neurorehabilitation, University of Zurich, who was not associated with the study. Courtine emphasized that the recovery of Summers did not imply a change in his routine, and that more research was needed to achieve a real change in the life of paraplegics and quadriplegics.

The electrical stimulator used by Summers is typically used for pain relief, and can cost up to $20,000. It was introduced in a region lower than usual, at the bottom of his vertebrae. "It sends a generic electrical signal to the spinal cord to stand or walk," said Susan Harken, lead author of the study.

Kakema and her team were surprised to see that the patient could move his legs voluntarily. "It shows that we have achieved the circuitry of the nervous system, which opens a new way to treat paralysis," she said. She added that some drugs have also helped the recovery process.

For John McDonald, director of the International Center on Spinal Cord Injury at Kennedy Krieger Institute in Baltimore, the strategy can be adopted by 10 to 15% of the paraplegic patients who may benefit. "We will do this with our patients, without a doubt."

For Summers, his two hours of walking are just the beginning: "My goal is to walk and run again. I believe that anything is possible and I'll get out of my wheelchair someday."