One in seven strokes occur during sleep

14% of strokes occur during sleep

The month of May is stroke awareness month. 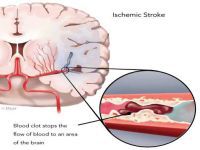 After reviewing 1,854 cases of people who visited hospital emergency rooms because of strokes (cerebral hemorrhages), researchers at the University of Cincinnati (USA) found that 14% of ischemic strokes occur during sleep, reducing the chance of speedy help to prevent brain damage, as reported to the American Academy of Neurology in an article published in the medical journal Neurology this Tuesday (10).

Ischemic stroke is caused by a blockage in cerebral blood flow, usually caused by a clot. Treatment should be administered within a few hours after the onset of symptoms. "When the person wakes up because of signs of a stroke, they typically do not receive adequate treatment because they do not know exactly when it started," said Jason Mackey, co-author of the study.

When the patient goes to the hospital within hours after the onset of symptoms, doctors administer a drug called TPA, which removes the blood clot. However, if they wait a long time, the drug cannot be used, because it increases the chance of hemorrhage that would make the patient's condition worse. "So it's almost impossible to use TPA in patients who awoke with a stroke and brain damage can be permanent in them," said Byron K. Lee, associate professor at the University of California.

The main medical recommendation is for the patient to seek medical help when waking up with some discomfort, particularly if there are any symptoms of a stroke such as:

- Paralysis or weakness of the face or limbs, especially on one side;
- Sudden difficulty walking or maintaining balance,
- Sudden difficulty in seeing;
- Slurred speech;
- Confusion or trouble speaking or understanding simple statements;
- Severe headache without apparent cause.