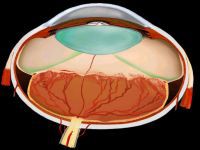 Scientists have used the anti-CD160 monoclonal antibody in two mouse tumor models and for other eye diseases.

Scientists successfully tested on animals what could be effective biotherapy for the treatment of certain cancers and eye diseases associated with the formation of new blood vessels (angiogenesis).

The latter becomes a pathological process when complete vascular growth is completed, and plays an essential role in the development of various eye diseases and malignant and non-malignant neoplastic tumors.

According to a study published in the Journal of Experimental Medicine, experts from the National Institute of Health and Medical Research (INSERM) identified and characterized a receptor called CD160, present in some tumors in humans and other species, but not found in healthy tissue.

To act on the same scientists used the anti-CD160 monoclonal antibody in two tumor models in mice and other eye diseases.

In their tests, researchers showed that the application of anti-CD160 on the receiver allowed reduction in the development of new blood vessels and thus tumor development.

Also, in the case of eye disease, a reversal of neovascularization was found.

The experiment offers new hope for cancer strongly associated with angiogenesis and diseases such as macular degeneration related to age, and diabetic retinopathy of prematurity (ROP), also called retrolental fibroplasia.