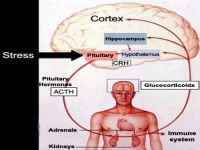 Overwork can kill. Or at least, cause changes in the normal functioning of the body as it reaches the point of exhaustion. This syndrome is increasingly becoming common in modern times. It has affected more than 10% of professionals in the developed world, according to estimates. Symptoms vary widely, from slight signs of anxiety at work, to even extreme exhaustion and immobility. The disorders described are the result of significant changes in the functioning of metabolism associated with hormonal imbalance. One of the hormones most linked to stress is cortisol, the natural "cortisone" of the human body.

This hormone is produced by glands located on top of the kidneys, one on each side. When we have a scare, or feel threatened or stressed, these glands secrete into the bloodstream high doses of cortisol. Among other functions, it prepares the body for fight and provides high concentrations of the immediate source of energy for muscles, glucose. It also helps regulate our metabolism and our basic daily rhythm.

Scientists have shown years ago that the concentration of cortisol in the blood increases dramatically in situations of acute stress. Moreover, in people with ongoing stress, chronic high concentrations of cortisol levels fall alarmingly low. It is the exhaustion of the stress hormone system.

Researchers at the Center for Stress Studies, University of Montreal, Canada, evaluated the possibility of using simple tests to detect the state of chronic stress and exhaustion. Thirty volunteers were valuated in the initial study, for the concentrations of several hormones, including insulin and cortisol. They correlated the measured concentration in blood and saliva, with the level of chronic stress and intensive labor.

The researchers were able to demonstrate a parallel between low cortisol levels and exhaustion. When they were observing how people with similar symptoms were routinely treated by doctors, they found that most received antidepressant medications. Paradoxically, this class of drugs typically reduces the levels of cortisol.

Scientists suggest that new studies attempt to establish clear criteria which separate laboratory depressed patients, from those with chronic stress and professional exhaustion. An accurate diagnosis can be very difficult. After all, despite the fact that the symptoms are very similar, the treatments are quite different and sometimes antagonistic. 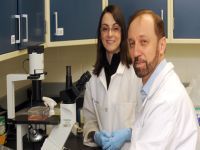 The treatment of patients with cancer has changed so profoundly in recent years so that scientists have different ways of fighting it, and often brilliant. The latest discovery by scientists at the Faculty of Medicine, Wayne State University, led by K. Rosner, is one such example. Basically, they built a molecule that resembles a natural enzyme, protein in cells, but slightly modified to trick cancer cells. The cancer cells begin to commit suicide. Chosen as a model, one of the more aggressive cancers and more resistant to chemotherapy treatments in the human body is melanoma.

The researchers genetically modified the enzyme DNAse1. This protein is a potent destroyer of the genetic code of cells. When introduced into tumor cells, this modified enzyme is resistant to natural destruction, and continues to act within the cell nucleus, gradually leading to digestion and DNA fragmentation. Scientists expect to fool the tumor cells and induce them to produce this lethal enzyme, they just sit back and expect that the tumor will commit suicide. Slowly. No need for chemotherapy or radiotherapy. Genial.