The statistics are staggering. 320,000 young people a year - nine per cent of deaths in this age group; two and a half million people annually, four per cent of deaths around the globe are caused by alcohol abuse. A new report spells out a dangerous new trend: alcohol-related deaths are affecting younger people more and more, as binge drinking becomes "cool". 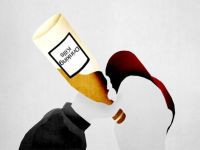 Drinking  kills. It kills millions of people every year, people who become addicted and cannot control their drinking, people who take a risk driving while under the influence of alcohol, people who have work accidents because the alcohol has impaired their capacities. All of these situations are wholly unavoidable - drinking alcohol is a voluntary act.

They were times when in general terms children did not start drinking at ten, going to the disco at eleven and being taken to the accident and emergency ward of a hospital at twelve in an alcoholic coma. Thirty years on, there are frequent reports from users of discotheques in many capital cities that among the clients are children, a large number of whom can be seen passed out on the floors of the toilets. Then around midnight, and especially on Friday and Saturday nights, the A & E wards in children's hospitals begin to fill up.

It is therefore hardly surprising that the figures for deaths from alcohol-related ailments are rising, today accounting for an estimated 2.5 million people around the world. In fact, one in twenty-five deaths, globally, can be attributed to alcohol intake. That is 4%. The situation is so serious that the UNO is urging governments to take concrete measures before alcohol abuse and its effects reach pandemic proportions.

The Global Status Report on Alcohol and Health indicates that harmful alcohol use is "increasingly affecting the younger generations and drinkers in the developing countries" where they have no doubt discovered that it is "cool" to "binge drink". The report states that around 6.2 per cent of all male deaths are related to alcohol, while it accounts for around 1.1 per cent of deaths among women.

Ala Alwan, the WHO Assistant Director-General for Noncommunicable Diseases and Mental Health declared in the report that "Many countries recognise the serious public health problems caused by the harmful use of alcohol and have taken steps to prevent the health and social burdens and treat those in need of care". However, despite a concerted effort in the international community, much more needs to be done.

Whereas in the past groups of people were happy to socialise all evening with one or two drinks (spending three-quarters of an hour sipping each one), chatting or playing games such as skittles or darts, these days the aim appears to get three-quarters drunk by downing a half a bottle of the cheapest spirits as fast as possible before leaving the home and then spend as little money as possible in a bar or club...or as little time in downing industrial quantities of "booze".

Awareness programmes and restriction is not going to work. What we need in our world today is re-education and passing on some common sense.