Bird Flu is back

Avian Flu or Bird Flu, A H5N1, is back with human cases of this highly pathogenic virus reported in the five countries this year. The good news is that A H5N1 has not yet managed to develop a mechanism to transmit easily from human to human. The bad news is that it might.

The main worry for the World Health Organization is the following: "A second implication for human health, of far greater concern, is the risk that the H5N1 virus - if given enough opportunities - will develop the characteristics it needs to start another influenza pandemic. The virus has met all prerequisites for the start of a pandemic save one: an ability to spread efficiently and sustainably among humans. While H5N1 is presently the virus of greatest concern, the possibility that other avian influenza viruses, known to infect humans, might cause a pandemic cannot be ruled out". 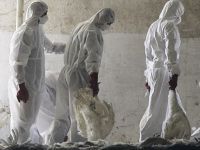 Although infection is almost always due to close proximity with poultry infected with the virus, and of these, most in urban or periurban areas on family farms with small numbers of poultry, especially prevalent among children or young adults who had otherwise been healthy; since 2003 there have been 510 cases in 15 countries causing 303 deaths (59%).

The Center for Health Protection of the Department of Health of Hong Kong, PR China, confirmed that a new human case of A H5N1 had occurred in a 59-year-old woman, in November 2010, the first such case since 2003. China this year has reported two cases this year with one fatality, Cambodia 1 case and one fatality, Vietnam seven cases with two fatalities.

On December 9, the Ministry of Health of Indonesia announced another human case, bringing the total this year to 9 with 7 fatalities. The 21-year-old female lived near to a chicken farm. The country most affected in 2010 is Egypt, with 23 cases and 10 fatalities, the latest being announced on December 8, a 30-year-old woman who developed symptoms on November 28 and died on December 2, despite having received Oseltamivir treatment.

WHO: "In many patients, the disease caused by the H5N1 virus follows an unusually aggressive clinical course, with rapid deterioration and high fatality. Like most emerging disease, H5N1 influenza in humans is poorly understood. Clinical data from cases in 1997 and the current outbreak are beginning to provide a picture of the clinical features of disease, but much remains to be learned. Moreover, the current picture could change given the propensity of this virus to mutate rapidly and unpredictably".