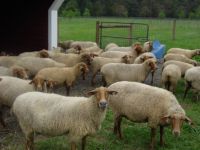 A deadly animal virus broke out earlier this year in Tanzania. Now the threat exists that it could spread to all of Southern Africa, threatening more than 50 million sheep and goats in 15 countries, the United Nations Food and Agriculture Organization (FAO) warned today. Should those animals become infected, it could devastate food availability.

The virus is known as Peste des Petits Ruminants, or small ruminants' plague. Abbreviated as PPR, it can cause death up to 100 per cent in sheep and goats. Humans cannot get the disease, but are affected by it causing food shortages. This virus is considered the most destructive viral disease affecting small flocks, resulting in famine and economic destruction.

The disease is spread through discharges from eyes, nose and mouth, as well as the loose feces. All will contain large amounts of the virus. Infective droplets are released into the air from these secretions and excretions, particularly when affected animals cough and sneeze. Other animals inhale the droplets and are likely to become infected. Although close contact is the most important way of transmitting the disease, infectious materials can also contaminate water, feed troughs and bedding, turning them into additional sources of infection.

Signs appear an average of two to six days after exposure to the virus (the incubation period). This is followed by the sudden onset of fever with a rectal temperature of at least 40° to 41°C. Diarrhea commonly appears about two to three days after the onset of fever.

Affected animals are markedly depressed and appear sleepy. Their hair stands erect giving them a bloated appearance, especially the short-haired breeds. Soon after this stage, a clear watery discharge can be seen coming from the eyes, nose and mouth, later becoming thick and yellow as a result of secondary bacterial infection. The discharges wet the chin and the hair below the eye. They tend to dry, causing matting together of the eyelids, obstruction of the nose and difficulty in breathing.

As the disease progresses, a characteristic foul smell exudes from the mouth. Affected animals resist attempts to open their mouths because of the pain.

Those rare animals that manage to survive this disease create antibodies. The antibodies are present throughout their entire lives, affording a lifetime of immunity from further infection. Those antibodies are what makes up the vaccine for the disease.

An emergency vaccination programme for Tanzania was initiated, and additional vaccination measures need to be done in the areas bordering Malawi, Mozambique and Zambia, in order to prevent the spread of PPR to those areas. The first priority is to ensure that the virus stops circulating in southern Tanzania.

If it spreads into all the 15 nations of the Southern African Development Community (SADC), the disease could devastate livelihoods and the food security of many millions. The animals cannot be moved from place to place until authorities give them the green light to do so.

It will be necessary for countries to receive assistance for emergency vaccination campaigns, to reinforce laboratory capacity, and strengthen surveillance on site. Awareness of the disease among veterinarians, traders and the international community is also imperative.