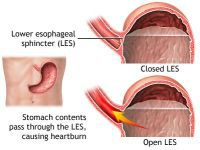 Among the most common symptoms are heartburn and chest pain. To prevent it, a change in eating habits is in order as well as other changes. The definition is fuzzy: "A condition that develops when the reflux of gastric contents causes symptoms and / or other complications."

If this sphincter muscle doesn't close well, food, liquid, and stomach acid can leak back into the esophagus. This is called reflux or gastroesophageal reflux. This reflux may cause symptoms, or can even damage the esophagus.

Symptoms and conditions associated with reflux disease can be classified into two groups:

The most common symptoms are: heartburn, regurgitation, pain on swallowing and chest pain. Excessive salivation and nausea are less frequent.

There are four associated conditions: reflux esophagitis with erosion and necrosis of the mucosal lining just above the junction with the stomach, esophageal narrowing caused by inflammation, Barrett's esophagus characterized by changes in the cells of the terminal portion of the body and adenocarcinoma.

Chronic cough, hoarseness and laryngitis accompanied by persistent hoarseness, usually associated with overuse of the voice, environmental irritants and cigarettes.

Asthma (as a cofactor in cases of difficult seizure control).
Enamel erosion of teeth caused by stomach contents flowing back to the mouth.

Paradoxically, some two thirds of people who complain of reflux esophagitis have none at endoscopy.

Therefore, when symptoms are typical, a rapid response to treatment is indicated. There is no need to perform endoscopies or other examinations. However, most doctors opted for endoscopy to rule out the possibility of narrowing esophageal cancer or Barrett's esophagus, a condition that predisposes to malignancy.

A tiny fraction of Barrett's patients - less than 1 percent - develop throat cancer, but it's a highly lethal form of the disease. About 10 percent of patients with persistent GERD develop Barrett's esophagus. What happens is that acid splashing back damages the lining of the esophagus and the body tries to heal itself by making new, acid-resistant tissue. At highest risk are overweight white males, age 50 and older, with a history of reflux.

Stop smoking.
If overweight or obese, lose weight.
Reduce the consumption of alcohol (especially red wine at night).
Avoid excessive eating, and go to bed at least two or three hours after eating. Do not lie down after meals.
Where the refluxes occur at night, elevate the head of the bed. Do not wear tight clothing or belts.

Reducing the acidity of gastric juice improves symptoms and facilitates regeneration of injured tissues by inflammation.

Over-the-counter antacids may be used after meals and at bedtime, although they do not last very long. Common side effects of antacids include diarrhea or constipation. Other over-the-counter and prescription drugs can treat GERD. They work more slowly than antacids but give you longer relief.

There are two groups of drugs used for this purpose: the proton pump inhibitors (omeprazole, pantoprazole, lansoprazole, esomeprazole and others) and H2 receptor antagonists (cimetidine, ranitidine, famotidine and others).

Studies show that proton pump inhibitors are more effective both in healing esophagitis and in controlling the symptoms.

The duration of treatment is extremely variable. As the symptoms tend to become chronic, long term use is indicated for a significant portion of cases. One study documented good efficacy and safety of proton pump inhibitors for up to 11 years.

The potential risks of prolonged use are: malabsorption of nutrients, small increases in the number of bone fractures after 50 years of age (poor absorption of calcium) and gastroenteritis.

Antacids may be useful in crises that arise despite the heartburn medication.

The classical treatment (Nissen fundoplication) is done by laparoscopy. In it, the upper stomach is sutured around the distal esophagus with the aim of creating an antirreflux barrier.

After a euphoric period in the 90s, the indications for surgery have become more restricted because the efficacy is greater in the healing of esophagitis than in the control of symptoms. Evaluated after ten years, about 60% of those operated on required medication again.

When to call the doctor:

* Feeling filled up quickly when eating