Wedding ring can make you a psychopath 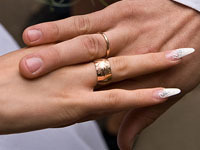 A wedding ring, which many men wear on the ring finger of their right hand constantly, can cause sexual weakness, and finally, complete or partial impotence. This theory is confirmed by wisdom of our ancestors, the experience of modern healers, and even the "corkscrew rule" from the school physics course.

Several years ago, we wrote about our conversation with a famous bioenergy therapist of the city of Severodvinsk (Arkhangelsk region), Sergei Gagarin. That publication traveled around the Internet. The notes of the healer made with his own hand are still kept in the archive of Pravda.ru.

"Every literate person remembers the so-called "corkscrew rule" from high school course of physics, when a current-carrying conductor is placed in a closed loop, emf of self-induction with a particular vector appears there. With sufficient approximation we can assume that the nerves in your fingers are a conductor, and an engagement ring is a closed loop.

If a finger is placed in a ring circuit, the flow of specific energy intensifies. We know that a ring finger is in the so-called energy meridians of the kidneys. Through the finger, the flow enters svathisthana chakra, "responsible" for the genitourinary system, and hence, to some extent, the sexual sphere.

If the ring is worn from time to time, the beneficial effects of the flow on the intimate sphere are evident. But if the ring is worn constantly ... Imagine the dripping water that wears away the stone. Or medication which is used as needed. Taking any medication without reason always leads to undesirable consequences.

The Slavs, for example, used to wear a wedding ring for no more than four hours a day. And their sexual power was high enough (remember the ancient epics and legends). They traditionally had many children. They would take their ring off while working or sleeping.

I will note this: the issue is quite complicated, and my explanation only covers a part of it. In this regard we could consider, for example, the qualities of metals - silver and gold, and much more. But overall we can make the following conclusion: those who do not wear a ring 24 hours a day may have fewer sexual issues."

In general, it is not a secret that both traditional and so-called "alternative" medicine has long recognized that the amount of metal on human body and well-being are closely linked. In the case of a wedding ring we are talking about "wire-nerves," passing through one finger. But imagine a bracelet on a wrist - it also acts like a "cable." Or a necklace: the neck is already an entire "cable track" with millions of veins. This jewelry acts as a closed circuit and also has an impact on people. So anything Sergei Gagarin said about the properties of a wedding ring, could be said about wearing metal bracelets and chains with some degree of approximation.

Does this mean that people prone to changes in their well being or experiencing problems with regular neurological or other disorders, should stop wearing rings, chains and bracelets? No, of course. But there should be moderation in everything.

The issue of jewelry is multifaceted, and has a very wide range of different nuances. For example, a specific ideological factor plays its role here. Sometimes (very often) people, especially women, feel at ease only if they wear a lot of gold jewelry. This is understandable: large amounts of precious metal stresses high social status. And this lady, by definition, will feel bad if people do not see her jewelry. Of course, a complete rejection of jewelry in this situation is unlikely to be beneficial. Yet, it is better if gold is taken off for a night.

Let us consider another aspect of the influence of "closed loops" in the form of rings, chains and bracelets on human health. Most of jewelry is made of gold and silver. General property of metals is the destruction of structures. This means that metals can destroy negative informational human structures.

A self-respecting acupuncture expert has at least two sets of needles for acupuncture to work on innervation points: gold and silver. Silver in acupuncturist has, in particular, anti-inflammatory effect on those organs that are associated with specific points on the human body. This metal removes and localizes inflammation. And if the body does not have enough energy for normal operation, a competent acupuncturist uses a gold needle, enabling the so-called energy flow.

Why did people start using gold as the material for wedding rings? The ancients saw those very properties of noble metal: it stimulates the flow, which provides energy for urogenital area. They also noticed anti-inflammatory properties of silver. A legend says that Alexander of Macedon had a silver mug, and was ill much less often than the rest.

Sergei Gagarin treated a woman who had significant gynecologic problems. She told him she was loyal to her husband, and never took her wedding ring off since the wedding. The healer demanded that she immediately took off all the gold that was on: her numerous rings, chains, bracelets, even earrings. The visitor was offended and left. But a month later she returned to Gagarin to express her gratitude for the advice: she was no longer wearing her gold all the time and got better.

Here is a piece of advice from the Severodvinsk healer regarding gold and silver. If you often feel weak, wear gold jewelry. If you suddenly feel irritable and agitated - wear silver.