Fallujah is worse than Hiroshima

This information is too important to only be written down ... and this is just a hurried comment. 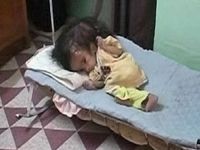 There was an interview on Al-Jazeera, led by Ahmad Mansour with Professor Chris Busby. Busby is Professor and Chief Scientist of Green Audit, and scientific advisor to the European Committee on Radiation Risk. To learn more about Professor Busby and his work you can search in Google: Chris Busby Uranium.

Professor Busby has published several articles on radiation and uranium contamination in areas like Lebanon, Kosovo, Gaza, and of course Iraq.

I will tell you of his recent discoveries, which were the subject of the program broadcast by Al-Jazeera. As some of you know, Fallujah is a forbidden city. It was subjected to intense bombing in 2004, with DU bombs and white phosphorous, and thereafter became a forbidden zone - which means that both the puppet authorities as well as the invading forces, the U.S. occupiers, do not allow any study to be conducted in Fallujah. Fallujah is under siege.

Obviously, both Americans and Iraqis know they are hiding something from the public. It is here that Professor Busby goes, determined to get to the bottom of what happened in Falluja in 2004. Being a renowned scientist in his field, he conducted research and tests in Falluja.

His preliminary results will be published next week - hopefully. Professor Busby has encountered many obstacles while developing his project. Neither he nor any member of his team were allowed to enter Fallujah to conduct interviews. So, when the main door closes, it becomes necessary to find other doors to open. And so they did.

He managed to gather a team of Iraqis in Fallujah to conduct the examinations for him. The research was based on 721 families from Fallujah, a total of 4,500 participants - living in areas with different levels of radiation. The results were compared with a control group - an example of the same number of families living in a non-radioactive area in another Arab country. For this comparative purpose, he selected three other countries - Kuwait, Egypt and Jordan.

Before we proceed to the preliminary results, I must stress the following:

*The Iraqi authorities threatened everyone involved in the research, with arrest and detention, should they cooperate with the "terrorists" that were interviewed. In other words, they were threatened within the scope of anti-terrorism laws.

U.S. forces have banned Professor Busby from obtaining any data, arguing that Falluja is a rebel zone.

Falluja's doctors refused the request to make statements that will be transmitted live to the Ahmed Mansour program, who has received numerous death threats and fears for his life. In other words, this study was conducted in extremely difficult conditions. But it was conducted.

As the program has not been uploaded on YouTube, I cannot provide an absolutely accurate transcript of it. But I took brief notes, and memorized the necessary facts. I will do everything possible to present all the facts that I learned today. So what did the U.S. and its Iraqi puppets do that they do not want the public to know? And why not allow any measurement of radiation levels in Falluja, and why do they forbid even the IAEA to enter the town? By what right? What happened in Falluja, exactly? What types of bombs were used? Only DU or something else?

*Something that is quite curious in Falluja is the dramatic rise in cancer rates in a short space of time, for example in 2004. Examples provided by Professor Busby:

*The rate of childhood leukemia has increased 40 fold since 2004 compared to previous years. Compared with Jordan, it is 38 times larger.

*The rate of breast cancer increased 10 times since 2004

*The rate of lymphatic cancer also increased 10 times since 2004.

2) Another curiosity in Falluja is the dramatic increase in infant mortality rates. Compared with two other Arab countries, such as Kuwait and Egypt, which are not contaminated by radiation, this is the picture:

3) The third feature in Falluja is the number of birth defects that suddenly exploded since 2004. This is a subject about which I've written in the past. But not the whole truth, today I learned a little more. The radiation from any of the agents used by the forces of "liberation" not only caused massive genetic deformities as well, and not least:

*provoked structural changes at the cellular level. In turn, this means that due to genetic alterations of the boys (lack of X chromosome), these are more likely to die at birth, and girls are more likely to survive with strong deformities. Another early example by Professor Busby: before 2003, birth rates in Falluja were as follows: 1050 boys to 1000 girls. In 2005 only 350 boys were born - which means that most did not survive.

*As for girls, and here lies the tragedy, the radiation causes changes in DNA, which means that if she survives, and tries to play, probably she will give birth to sons and daughters genetically disfigured or stillborn.

*The above findings are supported in other studies conducted in children and grandchildren who survived Hiroshima (held in 2007) and shows that even the third generation displays congenital malformations, including diseases (cancer, cardio-vascular problems) in a rate increase of 50 times. In Chernobyl, on the other hand, studies in animals in the same area show that the effects of radiation genetically engineered 22 generations.

In short, radiation is transmitted from gene to gene and has cumulative effects over time. (I will not dissect the why - the cumulative properties / memory of the cells and the activity of the immune system - you can read more details on this when the article is published by Professor Busby) [1].

*Some of these deformities in children are so grotesque that both Al-Jazeera and BBC (who produced a documentary on the subject), refused to broadcast these images.

Examples of deformations that Ahmad Mansour revealed in images:

*Children with two and three heads

*Children born without limbs or with excess of the same

*On this subject, doctors in Falluja were questioned about the relevance for the study of the comparison of the rates of congenital deformity in the space of one month (compared with the previous month). The result: within only one month, infants born with birth defects rose from one month (the prior month) to three times per day (current month, which for purposes of the study was February 2010).

*The uranium is introduced into the bloodstream through ingestion and inhalation.

The massive levels of uranium to which the population of Fallujah was subject also contributes to the skyrocketing increase of lung, breast and lymph vessel cancer in the adult population.

With these findings, Professor Busby and his team found that in comparison with Hiroshima and Nagasaki, Fallujah is worse. And I quote Professor Busby: "The situation in Falluja is horrific and frightening, more dangerous and serious than Hiroshima ..."

A side note, or maybe not:

I mentioned that these were preliminary results. Why?

Why has Professor Busby been harassed, has seen his research funds cut, closed doors, why was he threatened (as other scientists were who attempted to conduct similar studies in the 90s about Iraq)? The political implications are enormous and dangerous to America and its men in hand. It means that the scientific evidence of war crimes are right here at your fingertips ...

So, the life of Professor Busby has not been easy. The research conducted and produced with great difficulty was sent to the Lancet, for a review of the scientific committee. The Lancet refused it, saying it had no time to review it. Laboratories that in the past cooperated with him in the test samples refused to cooperate when they learned that the samples came from Iraq. Only two laboratories are available to test samples of the material or agent used in Falluja - and do so at an exorbitant price - due to the sensitive nature of the study. Also due to lack of funds, Professor Busby has about 20 samples for testing from Fallujah - which he carefully guards. He waits for the funds needed to test the samples.

When asked by Ahmad Mansour about their endurance in the face of the enormous obstacles he has faced, his answer was:

"All my life I sought the truth, I am a hunter of truth in this jungle of lies. I also have kids. Children are not only our future, but are the bearers of future generations. Over the past 50 years, the planet has been contaminated (with radiation) and this legacy is passed to our children and grandchildren. We owe the truth to the people of Falluja."

When asked how they deal with the shortage of funds and so many doors closed in their face, he replied:

"I rely on the goodwill of people who send small amounts, and I truly believe that as the main door closes, others open. Where there is a will, there is a way."

I tip my hat to him, Professor Busby.

I call on everyone who reads this article, all people of conscience to urge all Iraqis to (move it for God's sake!) and all Arabs contact Professor Busby and donate so that samples are tested and the truth about Falluja actually come to the fore. I will end this article with one last quote that I dedicate to this great man:

"The truth has wings that cannot be clipped."

I have to finish. It is dawn. I have not slept. I wanted to put this item to be available to the world ... the issue I take with me to bed - it is that I'll close my eyes - it's the same question I have asked since 2003:

Why? What did the Iraqi people, the Iraqi children, do to deserve this?

The conclusion is horrible ...

* Layla Anwar is a member of the Arab Woman Blues, an organization that considers its homeland the Arab nation.