Pandemics and Panic: A Lethal Mixture

Were the world’s medical authorities acting correctly during the Pandemic of influenza A H1N1? Did they know what they were doing? Were they in full control of biological reactions to new drugs? These are the questions raised after the findings of a Canadian study which indicates that those vaccinated with seasonal flu vaccines were up to 2.4 times more likely to suffer from increased symptoms of the pandemic A H1N1 virus. 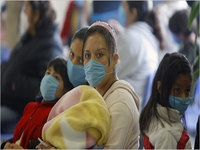 Pandemics and Panic: A Lethal Mixture

Estimates based upon four separate studies (globally involving 1,226 laboratory-confirmed cases of pH1N1) show that prior vaccination with 2008-09 TIV “was associated with increased risk of medically attended pH1N1 illness during the spring-summer 2009, with estimated risk or odds ratios ranging from 1.4 to 2.5” compared with other persons who had not received seasonal influenza vaccines.

What caused the study to be launched was the fact that the Canadian medical authorities noted during a school outbreak of pH1N1 in late spring 2009 “people with illness characterized by fever and coughing had been vaccinated against seasonal influenza more often than individuals without such illness”.

The study states clearly that further investigation needs to be carried out due to the fact that “confounding” features might cloud the findings (these being that unknown characteristics may be responsible for increased susceptibility, and not the previous vaccination with seasonal influenza vaccines) and the publication is careful to point out that the findings contradict other studied carried out in other countries which produce no such trends.

However, the fact remains that during the spread of A (H1N1) (pH1N1), commonly called Mexican Flu, then Swine Flu, then just A H1N1 or Pandemic Flu, the world’s health authorities were incapable of stopping the disease spreading from Mexico/California in March/April 2009 to the rest of the world.

As it happened, the mortality rate was far less significant than the quantities of antiviral medicines sold. Yet the point is that faced with another scenario with unknown consequences, neither are the world health authorities minimally able to protect us, nor does the medical profession fully understand the implications of vaccination programmes faced with such pandemics.

This is the message that remains crystal clear from the A H1N1 “story”.