An Italian doctor discovered something simple that concerns the cause of cancer. Initially banned from the Italian medical community, he received a standing ovation at the American Cancer Society when he presented his therapy. The doctor noted that all patients with cancer have thrush. It was already known to the medical community, but was always treated as an opportunistic infection by fungi - Candida albicans. The doctor found it very strange that all types of cancer have this characteristic, i.e., there are several types of tumors but all have in common the appearance of the famous ulcers in patients. 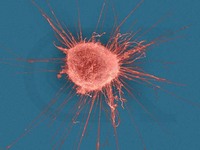 So they may be experiencing results of the opposite - he thought.

The cause of cancer may be the fungus. And to deal with this fungus, we use the simplest medicine known to humankind: baking soda. So he began to treat their patients with sodium bicarbonate, not only ingestible, but methodically controlled on tumors. Amazing results started happening. Lung, prostate and bowel cancer disappeared as if by magic, along with the Canker!

Thus, many patients were cured of cancer today and their exams prove the extremely positive results of treatment. For those interested in more on the subject, follow the link (in English): do not stop the video in the link below, the doctor speaks in Italian, but it has subtitles.

There the methods used for application of sodium bicarbonate on tumors are shown. Any tumors can be cured with this simple and inexpensive treatment. Looks like a joke, right? It was news in the U.S. but it never came here (for various reasons).

This is even though the book of Homeopathy recommends treating tumors with Borax, which is the homeopathic remedy for canker sores. After all, this is some good news in an environment in which there is so much bad.

Again, the question remains: why does the mainstream press not give more coverage to this? Not on TV or on radio or in newspapers of wide circulation ... Absolutely nothing. Who forbids them from reporting? The doctor had to build his own website to disseminate his work to cure cancer (or at least in many of its forms), using only a solution of sodium bicarbonate to 20%. Imagine! Baking soda, one thing that we find in any pharmacy or corner drugstore. This link is the video, where the Italian doctor shows the evolution of treatment in 4 cases until their complete cure:

If you want to see it in English, Italian or Portuguese, go to this site and click on the little flags on top of the page and it changes to the language you want:

Certainly, the laboratories are not interested in spreading this news, after all there are big money profits on drugs they manufacture for a serious disease that can be cured simply with sodium bicarbonate to 20% that costs some simple cents.