Women of the whole world can be divided into two groups (blondes and brunettes do not count here): fans of tampons and fans of maxi pads. The first group says that they are progressive women, whereas the women of the second group claim that they prefer everything natural and traditional. 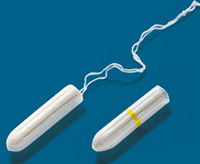 Everything is clear about maxi pads. The only question that can be discussed about them is the question of comfort. As for tampons, there is a variety of concerns and rumors going about them.

The adversaries of tampons say that their use leads to a variety of diseases of women’s reproductive organs, such as cervical erosion and many others. They say that tampons are treated with adsorptive chemicals which deteriorate the mucous membrane of the vagina. The most common opinion is that a tampon plugs the vagina and impedes the natural efflux of fluids from the body.

Tampons appeared in the beginning of the 1930s. The roll of cotton and gauze fabric was dubbed Tampax (derived from ‘tampon’ and ‘pack’). Johnson & Johnson showed no interest in the novelty. The industrial production of tampons was launched in 1936. Procter & Gamble is currently the owner of the Tampax trademark, whereas Johnson & Johnson began to promote O.B. tampons from 1950.

The use of tampons can be risky for the women who have a peculiar structure of the virginal membrane. Some women say that tampons produce the sensation of dryness in the vagina. It is recommended not to use them in such cases to avoid vaginal microtraumas. Tampons are not recommended for women who take vaginal medications (suppositories, etc), for the effect of the treatment can be diminished because of the absorbing qualities of tampons.