Those who snore may not wake up one day

Many people disregard snoring thinking that it does not cause any health problems except for sleepless nights to those who sleep beside. As a matter of fact, snoring can be extremely dangerous. 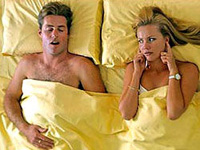 Those who snore may not wake up one day

“Snoring can be dangerous because it can develop into the obstructive sleep apnea hypopnea syndrome, when a person may have a respiratory arrest,” Doctor Valery Svistushkin said. A respiratory standstill may reoccur frequently, but a person may not breathe again if it lasts too long. The phenomenon may also trigger a stroke or an infarction because blood pressure rises considerably when a person stops breathing. Such problems may occur 20 or 30 times a night, which may lead to death. Besides, a person suffers from a lack of sleep and becomes languid because the brain does not get enough rest. About 25 percent of men develop erectile dysfunction and a whole bouquet of other diseases because of snoring.

The frequency and the occurrence of respiratory arrests can be revealed through a special technique known as polysomnography. It is a comprehensive recording of the biophysiological changes that occur during sleep. A polysomnogram typically shows all parameters of sleep: the snoring amplitude, respiratory pauses, blood pressure changes and oxygen deficit.

However, even if you do not have respiratory arrests, it does not mean that you can disregard your snoring. Sleep disorder can occur at any moment, so it would be better to consult a doctor before it happens.

Sometimes it can be enough to have a nasal septum surgery, get rid of the chronic nasal cold, reduce the size of the soft palate or remove the enlarged tonsils. If it is a child that snores, he or she may have problems with adenoids.

Special equipment can be used in the event surgery does not help. The treatment is known as SIPAP therapy.

Those who want to improve their condition at least to a certain extent may try not to sleep on the back. A person can fix a ping-pong ball to his or her back to let a patient control positions of the body during sleep.