Female orgasm is probably one of the most mysterious phenomena in the world. There is very little precise knowledge about this phenomenon, some people hardly believe in it, although they do think that one needs to talk about it. Female orgasm is like the divine afflation – it is different and unique every time and all the time. 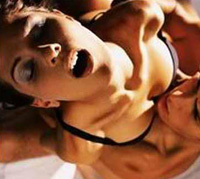 Some think that the clitoris is the most important organ in the process of achieving female orgasm, whereas others prefer to point out the importance of the vagina, or even both. Another theory says that female orgasm is a pure myth, which party girls made up to steal other women’s husbands. Some may even say that sex life is led for conscience, not for happiness, because women must always please their men and give birth to their children.

The state of affairs with male orgasm is simple: relatively long frictions result in a small explosion and a little bit of moaning and panting, and it is pretty much it. A man ejaculates a substance, which incarnates the triumph of the materialistic philosophy over the idealistic philosophy: there is no God, “a spark will kindle a flame” if no contraception is used.

A clear definition of female orgasm can not be found in any encyclopedic or medical books. They will only attack you with such phrases as “a complicated sequence of actions,” “the climax of sensual feeling,” “neurophysiological reactions,” “the feeling of deep sexual satisfaction” and so on and so forth.

There are classifications of female orgasm in modern science, of course – the vaginal, the clitoral and the uterine orgasm.

Many women acknowledge that the vaginal orgasm, which they can achieve with the help of a skilful male organ of adequate size and appropriate erection, is the most sensual orgasm among all of the above-mentioned types. It may last for a minute, but this minute may seem to be eternal at times.

The G-spot, the talk of the town, is a certain accumulation of mysterious cells between the urethra and the anterior wall of the vagina. The spot was discovered by Ernst Grafenberg in 1950. The scientist introduced the so-called female ejaculation to the world, which, as he said, may appear upon the stimulation of the spot, the G-spot (named in discoverer’s honor).

According to Grafenberg, one needs to insert two fingers in the vagina (fingertips turned upwards) and move them around. The G-zone feels a little rougher than the surrounding tissue. It engorges, swells up, releases a portion of liquid substance during “ejaculation” and becomes rough again. This is the moment, Grafenberg believed, when a woman orgasms.

Scientists made little account of the discovery, they needed facts. It goes without saying that scientists can be very meticulous when it comes to something important. They need to see and calculate everything. However, it is never possible to calculate and see anything about orgasm.

Emmanuele Jannini of the University of L’Aquila conducted a small experiment, in which he proved that only the proud owners of G-spot could enjoy the vaginal orgasm. Thirty women participated in Jannini’s research, but the spot was found with only eight of them. The research thus explained that many women would never find their G-sports because not all women have them.

Does the research suggest that 22 other women of the test group never have orgasms? According to Emmanuele Jannini, a woman’s ability to experience orgasm can be determined through a simple and inexpensive procedure. Those women, who do not have any visible attributes of the G-spot, can not experience the vaginal orgasm, the Italian researcher concluded. If it is true, it means that 73.33 percent of women living on the planet are frigid, which would obviously be a ridiculous statement to make.

Ladies, the G-spot fantasy is not important. Sex life is like sports: practice makes perfect.