Sunbathing topless not recommended for fatty and not pretty women

A woman sunbathing topless on a beach does not surprise anyone now. Most people do not even pay any attention to such a phenomenon nowadays. Some other women believe that they have to remove the lower part of their bathing suit too, although in this case they need to find a nude beach. Sunbathing nude obviously has its advantages. It gives a beautiful tan with no stripes of white skin on the body, whereas the body does not suffer from synthetic fabric. However, wearing Eve’s or Adam’s costume has its downside too. 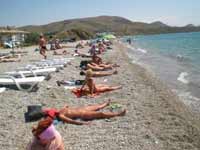 Sunbathing topless not recommended for fatty and not pretty women

Also read: The variety of nude beaches of the world

“Sunbathing for a long time can be harmful. It does not matter which part of the body is exposed to the sun. If a person spends hours on a beach and does not use protective creams, it will inevitably lead to the photo-ageing of skin. Too much sun makes the skin flappy and leads to the appearance of premature wrinkles and pigment spots,” a professor of skin and venereal diseases of the Moscow Medical Academy, Nikolai Potekayev said.

Too much sunlight can also trigger the development of malignant skin tumors, especially if a person has a genetic predisposition to it.

Cancer specialists say that malignant tumors are not likely to develop on the place of birthmarks under the influence of sunlight. Furthermore, breast cancer can in no way be linked with sunbathing topless. It all depends on the damage of the genes responsible for the development of this type of cancer.

“Sunbathing, especially topless sunbathing, must be excluded at node-positive mastopathy. The heat can trigger the development of malignant tumors in the mammary gland. However, sunbathing is allowed at diffuse mastopathy,” surgeon Vladimir Yevtyagin said.

In addition to medical nuances, sunbathing topless also involves an element of flirting, psychologists say. Many women like it when men stare at them.

Sunbathing topless is strictly forbidden in many Muslims states. The Italian beach etiquette says that “fatty, ugly and unpretty women are not allowed to appear on the beach topless.”