Vegetarianism has become extremely popular nowadays. This diet obviously has its advantages, although disadvantages are quite numerous too. 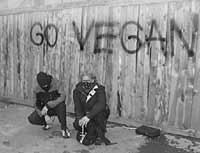 Scientists proved that vegetarians hardly ever suffer from obesity and increased cholesterol. In addition to that, vegans can boast of better state of health and longer lifespan.

However, it still unknown whether vegetarians live longer strictly because of their dietary regime. It is not ruled out that the number of smokers is smaller among those who prefer to stay away from meat dishes, which may explain a longer lifespan.

Adversaries of vegetarianism say that those, who do not eat meat, suffer from the shortage of zinc, iron, B12 vitamin, protein, iodine and calcium. The Food Research Institute of Slovakia found out that the children of vegan parents do experience a shortage of protein. Such children also have a lower level of iron in their blood.

Some believe that the human digestive system is not adjusted to the digestion of meat. Allen Carr, who is known for his Easyway To Stop Smoking Method, says that meat is a surrogate which does not have the required nutritive value. The human intestines are too long, whereas meat decomposes rather quickly. That is why, the specialist believes, meat becomes poison for a human body.

Adversaries of vegetarianism assert that human beings have been predatory for thousands of years. Scientists of the Catalonian Rovira i Virgili University discovered remnants of an ancient European male. The find was over one million years old. Primitive weapons and animal bones found near the body of the ancient human-like creature testified to the fact that our ancestors ate animal meat.

It is an open secret that vegetarians replace meat with soy products. Specialists of the University of Oxford determined that this product, which serves as the source of amino acids for vegetarians, may produce a negative effect on memory. The specialists concluded that those eating a lot of pickled tofu have a lower brain activity.

Vegans believe that it is immoral and cruel to eat other creatures’ meat, especially when there is no vital necessity in it. Indeed, some people become herbivorous just because of this very assumption. Many say no to animal meat after they see what happens in slaughter houses.

Some believe that vegetarianism is a luxury lifestyle that can be affordable only in warmer countries. Needless to say that northern countries do not have the sufficient variety of fruit and vegetables for food, that is why it is merely impossible for people living in northern countries to become vegetarians.

Vegetarians say that one should not simply strike meat out of daily rations to become a vegan. The veggie diet can be only harmful in this case. A healthy and reasonable approach to one’s state of health and financial possibilities is extremely important for the right kind of diet. First and foremost, it is rather expensive to be a vegetarian in a country where winter is three times longer than summer. Secondly, a sudden and significant change in the diet can be very harmful healthwise.